From the publisher:  Nate Colgan would be the first to admit that his violent reputation makes him very good at his job – and bad at everything else. After eighteen years spent working on the sidelines of Glasgow’s criminal underworld, there’s no question he’ll accept the central position that Peter Jamieson’s crime organization offers him, despite his better judgment.  The organization isn’t as strong as it once was:  its most powerful members are either dead or behind bars, including Jamieson himself, and the time is ripe for change.  Change begins with an execution – – a message for Jamieson’s supporters – – which promptly sets the various factions within the organization against one another.  Colgan’s position as “security consultant” means his duty is clear:  identify the killer and find out who’s wiling to seize power at any cost – – even if it means igniting a war.  Meanwhile, on the other side of the law, DI Michael Fisher conducts his own investigation into the murder. Both men can’t help but wonder: Why do these events coincide with the return of the mother of Colgan’s child, Zara Cope, a disreputable woman who seems to have an uncanny ability to attract trouble and troublemakers?  A dark and thrilling crime drama, Every Night I Dream of Hell takes us deeper into a world of violence, fear, and double crosses.

Early on we meet Kevin Currie, a major part of “The Organization,” a guy “in his late forties getting slowly fat and jowly.”  Colgan, a member thereof since he was 18, is now replacing the man formerly Jamieson’s hitman, a line Colgan himself “had never crossed.”  Actually and directly causing the death of another was against his principles, as odd as that may sound, as Colgan is and can be as brutal as necessary.  An insomniac, Colgan thinks “the only world darker than the one I lived in was the one I slept in. . . I was always waking up growling at the darkness, scared of the things I was yet to do.”  He says of himself “I’m not an ugly man, a little weathered and starting to grey at the side of my dark hair, but not wholly unattractive and certainly well built. I’m smarter than most in this business, but not exactly a bundle of laughs.”

To call Colgan “morally complex,” as some readers have done, is an understatement.  The novel is hard-boiled, filled with dark humor, and Colgan is a fascinating protagonist, if one wants to so characterize him.  This is the fifth book written by Malcolm Mackay, the 2nd standalone after The Glasgow Trilogy, and is, as the earlier ones, highly recommended.

Not to detract from that sentiment, it should perhaps be noted that there is a five-page long list of characters provided at the beginning of the novel, and that is a good thing, although I must admit I did not refer to it as often as I needed to – the plethora of characters at times [many!] making it difficult to keep them straight in my mind. 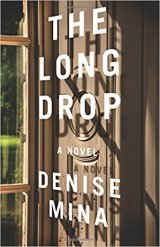 From the publisher: William Watt’s wife, daughter, and sister-in-law are dead, slaughtered in their own home in a brutal crime that scandalized Glasgow.  Despite an ironclad alibi, police zero in on Watt as the primary suspect, but he maintains his innocence.  Distraught and desperate to clear his name, Watts puts out a bounty for information that will lead him to the real killer.  Peter Manuel claims he knows the truth that will absolve Watt and has information that only the killer would know.  It won’t come cheap.  Manuel is an infamous career criminal, a degenerate liar who can’t be trusted and will say or do anything to make a buck.  But Manuel has something that Watts wants, which makes him the perfect target for Manuel’s consummate con.  Watts agrees to sit down with Manuel, and before they know it, one drink has turned into an epic, forgotten night of carousing across the city’s bars and clubs that exposes the thin line between a yarn and the truth.  The next time the unlikely pair meet is across the witness stand in court – – where Manuel is on trial for the murder of Watt’s family. Manuel calls Watt to the stand to testify about the long, shady night they shared.  And the shocking testimony that Manuel coaxes out of Watt threatens to expose the dark hearts of the guilty and the innocent.  Based on true events, The Long Drop is an explosive, unsettling novel about guilt, innocence, and the power of a good story to hide the difference.

It won’t be a spoiler to state that the eponymous “long drop” is a reference to the method of the hanging process which was still the sentence of choice in murder cases when this case occurred, although capital punishment has since been abolished.  I am probably among the majority, at least in the U.S., when I confess ignorance of this crime, trial and the outcome thereof, so this True Crime novel was my first awareness of the apparent scandal that surrounded the case in the country where it took place.  Manuel, 31 years old at the time, and his trial, become a sensation.  The killer sought here “attacks women in the dark, hides in dusty attics, waiting for people to leave their homes so he can steal their mother’s engagement ring, lies on pristine linen bedclothes with dirty boots on or drops food on precious rugs and grinds it in with the heel of his shoe, spoiling a modest home for spite; he drags women down embankments, scattering their shopping in puddles, telling their three-year-old son to shut the f*** up or he’ll kill their mum.”  A rape charge against Manuel ends in a unanimous decision of Not Proven.  But there are still 8 murder charges against him, including that of two 17-year-old girls.  The trial is recounted in very convincing form by the author, whose previous books I have found extraordinarily good.  The chapters alternate between early December of 1957,and January of 1958, when the crimes occurred and May of 1958, when the trial takes place.  The characters are very well-drawn, especially that of Manuel and his parents, as well is Laurence Dowdall, “Glasgow’s foremost criminal lawyer”.   Another terrific novel from this author, and it is recommended.

One thought on “Book Reviews: Every Night I Dream of Hell by Malcolm Mackay and The Long Drop by Denise Mina”