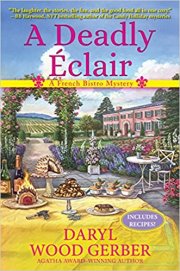 It’s always been Mimi Rousseau’s dream to open her own bistro, but it seems beyond her grasp since she’s been chased back home to Nouvelle Vie in Napa Valley by her late husband’s tremendous debt. Until her best friend Jorianne James introduces her to entrepreneur Bryan Baker who invests in promising prospects. Now, working the bistro and inn until she’s able to pay it off and call it her own, Mimi is throwing the inn’s first wedding ever.

The wedding will be the talk of the town, as famous talk show host Angelica Edmonton, daughter of Bryan’s half-brother, Edison, has chosen the inn as her perfect venue. Anxious, Mimi is sure things are going to turn south, especially when Edison gets drunk and rowdy at the out-of-towners’ dinner, but by the evening, things begin to look up again. That is until six AM rolls around, and Bryan is found dead at the bistro with an éclair stuffed in his mouth. And the fingers point at Mimi, whose entire loan is forgiven in Bryan’s will.

An interesting thing occurred to me while I was reading this cozy—the main characters were not always very likeable, or relatable for that matter, but it didn’t really matter all that much. In fact, I’m usually bothered by a very large cast but not this time because Ms. Gerber makes them all so individualistic and memorable.

Most satisfying to me, the protagonist, Mimi Rousseau, has a very legitimate reason to do her own investigating because she’s been pegged as a prime suspect. That’s what happens when the death of a murder victim benefits one person in such a generous fashion. Mimi is a smart lady, not inclined towards putting herself in jeopardy (which I appreciate greatly) and a wedding party full of hostile relatives of both the bride and groom gives her a plethora of potential killers to check out. That’s the trouble, actually—too many possibilities send Mimi and the reader in so many directions that solving Bryan’s murder becomes something like wading through a bog but Mimi finally gets to the other side. As for me, I was kept guessing almost to the denouement, mainly because I kept changing my mind.

This author clearly has a sure hand with whodunnits. I haven’t read any of Ms. Gerber‘s earlier work and there’s a lot of it but, if A Deadly Eclair is any indication, I think I need to start reading.

To enter the drawing for a hardcover
copy of A Deadly Eclair by Daryl Wood
Gerber, leave
a comment below. One
winning name will be drawn Friday
evening, November 24th. This drawing
is open to residents of the US and Canada.