I think my poor little bathroom that doesn’t even have cool stuff like
a jetted tub or a vanity for two or heated floors is going to set a
Ripley’s Believe It Or Not record for the longest bathroom reno EVER.

Don’t get me wrong, things haven’t been at a complete standstill. The
missing box of shower tile came in so all the tile and grout work is
done. The shower hardware was put in and then replaced because it
wasn’t quite what I wanted but I’m happy with it now.

Some of the other fixtures have been installed… 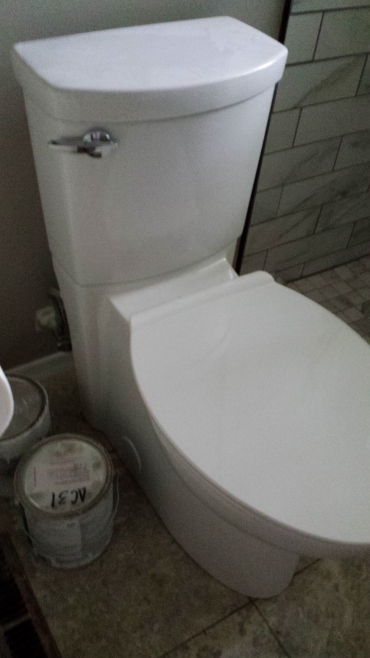 …including the most important piece. I can’t tell you how much I
don’t miss traipsing up and down stairs a gazillion times a day 😉

Then, the shower glass guys came and did their thing so now I
can actually take a shower without going downstairs. However,
because the renovation gods apparently think I haven’t been worthy,
I had another lesson in “be careful what you wish for”. Until
I used it the first time, it didn’t dawn on me that I have
to get in before I can turn it on so I get to stand there in cold
water while it heats up. Oh, well, it is what it is. 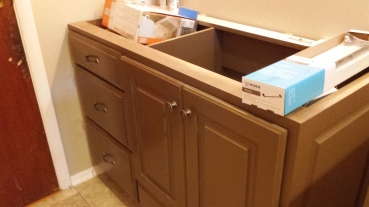 And now the wait for my glass countertop goes on and on and on.
This is what I get for picking something out of the norm—there’s
only one guy on the East Coast who cuts this and he’s in Massachusetts
or some such place up there. Last we heard, it was put on a truck for
shipment but we have no arrival date yet. In the meantime, I’ve gotten
used to brushing my teeth and washing my hands in the kitchen but
this really is getting old. My contractor is nearly beside himself—he
was told three weeks but it’s been almost seven and, of course, I’ve
only paid him a portion of the total contract. I’m not sure which one of
us is more frustrated but I suspect it’s him. Maybe next week…

In the meantime, I’ll have the real version of this Louisville
sculpture of a very large mint julep 😉