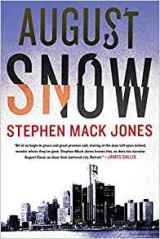 August Snow is the third book I’ve read so far this year that’s going on my “Best Reads of 2017” list. Yes, I’ve read other good ones, but the “best” are special in some way.

What’s special about August Snow, is August Snow. Jones has created a truly excellent character, heroic, honest, blessed with his friends and he knows it. The problem may lie in figuring out who his friends are. His enemies are pretty obvious.

August has been gone from Detroit for a year, trying to drown painful memories in travel and booze. He’s got plenty of money, having won a $12 million dollar case against the city after he lost his job as a cop. August, you see, blew the whistle on corrupt politicians and the police force running the city and they had him wrongfully dismissed from the force. But now he’s come home to live in his parents’ old home in Mexicantown.

All too soon he’s asked to investigate what may be embezzled funds from Eleanor Paget’s wealth management bank. He turns her plea for help down, only to learn that the very next day she’s committed suicide. Or has she? August doesn’t believe it, which soon lands him right in the midst of murder and more corruption than you can shake a stick at.

You may think you’ve read this plot before⏤Lord knows there’s enough corruption in the real world to make the premise almost commonplace⏤but you won’t have had a hero like August Snow.

Twists and turns carry the reader on a wild ride. The good guys keep you hoping for justice. The bad guys will twist you in knots.

Author Stephen Mack Jones is a novelist to watch!