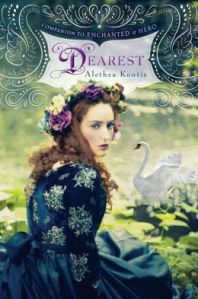 Readers met the Woodcutter sisters (named after the days of the week) in Enchanted and Hero. In this delightful third book, Alethea Kontis weaves together some fine-feathered fairy tales to focus on Friday Woodcutter, the kind and loving seamstress. When Friday stumbles upon seven sleeping brothers in her sister Sunday’s palace, she takes one look at Tristan and knows he’s her future. But the brothers are cursed to be swans by day. Can Friday’s unique magic somehow break the spell?

What drew me to the first book in the Woodcutter Sisters series and the second and, now, the third, is the covers. The designer is listed as Christine Kettner but, as Art Director, Ms. Kettner is not the actual artist. Whoever it is, that artist and Ms. Kettner have true magic in the their minds, eyes and fingers. I’ve seen other beautiful covers but these stand out and just one glance tells me this is an Alethea Kontis book; that’s brilliant branding at its best.

Opening Dearest takes the reader into Ms. Kontis’ unique world of fantasy and magic, a world I’m always glad to returen to. Other authors offer re-tellings of fairy tales and some do it very well but the Woodcutter Sisters series has a certain feel to it, a feeling that you’re immersed in the story and, in this case, sharing the journey with Friday. I love Friday—I think she’s my favorite of the sisters so far mainly because she’s so sweet and kind—and Tristan is also very likeable but it’s the seven brothers as a group who make this tale so much fun.

There are a few missteps, especially when coincidences happen too frequently, and the only reason I can stand the insta-love is that this is, after all, a fairy tale but, generally, I’m happy with this entry in the series and will eagerly await the next one.

The Other Woodcutter Sisters Books 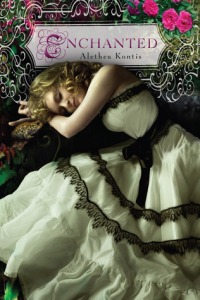 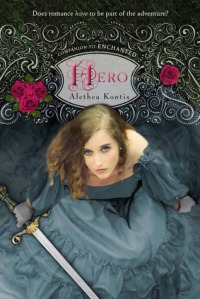 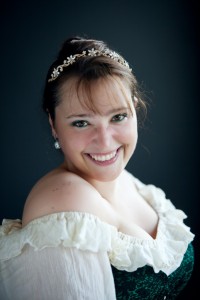 Her published works include: The Wonderland Alphabet (with Janet K. Lee), Diary of a Mad Scientist Garden Gnome (with Janet K. Lee), the AlphaOops series (with Bob Kolar), the Woodcutter Sisters fairy tale series, and The Dark-Hunter Companion (with Sherrilyn Kenyon). Her short fiction, essays, and poetry have appeared in a myriad of anthologies and magazines.

Born in Burlington, Vermont, Alethea currently lives and writes in Florida, on the Space Coast. She makes the best baklava you’ve ever tasted and sleeps with a teddy bear named Charlie.

Want to meet Alethea in person? Check
out her Road Tour HERE!