Fifteen year old Courtney wants to be normal like her
friends. But there’s something frighteningly different about
her—and it’s not just the mysterious tattoo her conspiracy-obsessed
grandfather marked her with before he disappeared. She’s being
visited in her bedroom at night by aliens claiming to have
shared an alliance with her grandfather. And imaginary or
not, they’re starting to to take over her mind. “Mental illness
is a slippery slope,” her mother warns her.

The last thing Courtney wants to do is end up crazy and
dead like her grandfather did. But what about the tattoo?
And the aliens trying to recruit her? With her new
alien-savvy friend Agatha and her apocalyptic visions,
Courtney begins connecting the dots between the past,
present and future—of her bloodline, and the ancient history
that surrounds it. Is she going insane, like her family claims
her grandfather did, or is she actually a “chosen one” with
ancestral connections to another world? Either way, Courtney
has a mission: untangle her past, discover the truth, and
stop the apocalypse before it’s too late for everyone.

The Alienation of Courtney Hoffman was featured
in Redbook Mag! Check it out HERE!

An Excerpt from
The Alienation of Courtney Hoffman

Lightning ripped across the northern California sky, then splintered down through the rain and disappeared behind our neighbor’s house. Letting the door slam shut behind me, I ran away from the warmth of our porch light into the darkness of our backyard. My mom would’ve killed me if she’d caught me outside that late at night. Especially in a thunderstorm, and on the night before my fifteenth birthday, with the big party she had planned for tomorrow. But I had to get out of the house before I fell asleep and they came for me. And they were coming! 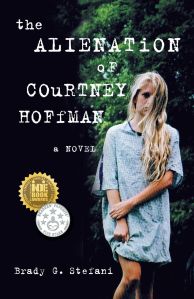 A gust of wind blew my hair against my face. I swiped it out of my eyes just in time to see a plastic lawn chair tumbling through the air. I covered my head with both arms, but a leg of the chair smashed against my elbow. Ouch!

I dropped onto the wet grass, pulled my knees into my chest, and rocked nervously back and forth. Water soaked up through my nightgown and my underwear, making me shiver.

None of these things mattered, though. Because something far worse was happening inside my head. A memory of me as a little girl, on the night my grandpa Dahlen disappeared from his cottage, was trying to claw its way into my consciousness.

And I didn’t want to think about that night. Ever.

Still, I couldn’t stop it, which didn’t make sense. I was awake, and outside, where I was supposed to be safe, yet the aliens from my dreams were somehow messing with my thoughts, rearranging things, trying to make me think about that night! But how?

And why? It happened eight years ago, and my grandpa was dead now.

Although, before he disappeared, he’d— No! Stop, Courtney! I yelled at myself.

I bit my fingernail and took a deep breath, hoping to calm down.

No luck. I was remembering the musty old-books smell from my grandpa’s bookcase. Butterflies rushed into my stomach and I sprang to my feet.

“All right. Is that what you want me to do?” I shouted into the rainy darkness. “Remember my grandpa? What happened that night? If I do that, then will you leave me alone?”

I wiped the rain from my eyes, and suddenly it was like I was right there, in the cottage. His notebook sat on the plaid couch, opened to a map he’d drawn of the ancient wormholes linking the alien world to our own.

Brady G. Stefani has a bachelor’s degree in creative writing, and a graduate degree in law. During law school, he spent time as an involuntary commitment caseworker for the Massachusetts Department of Mental Health, where he interacted with patients suffering from severe thought disorders, including numerous patients presenting with subjectively real memories of being visited and abducted by alien beings (commonly referred to as alien abduction phenomenon). It was through his study of these patients, along with his own struggles with anxiety and cognition, that Stefani became aware of just how deceiving, mysterious, and powerfully resilient, the human mind can be.

In an effort to provide awareness of mental suffering, and spread hope to all those touched by it, Stefani is focused on writing YA novels that explore the experience of being different and the other-worldly places our boundary-less imaginations can take us. Alienation is his first novel. But with two works currently in progress, the journey has just begun.