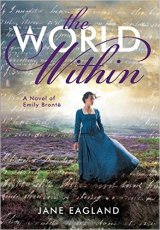 
Well, this is embarrassing.  As someone who considers herself relatively well read, I know of the Bronte sisters in only a vague, pedestal-classics-women-only-wear-dresses kind of way.  Apparently, I’m not mature enough to put that aside and just read a book.  Unfortunate and unfair when reading for review, I almost allowed my uninformed opinion of the main character to cast a shadow over the entire effort.  Absolutely asinine; I dig so much about this book.

I loved that Emily grew by leaps and bounds in some ways; staying self-limiting to the extreme in others.  The author’s adoration and admiration is clear and contagious.  Ferociously fond, Ms. Eagland is nevertheless fair and forthright.  Emily has faults that she may never notice but the author acknowledges in a skillfully sly, demonstrative way.

Clearly consumed with compassion for her siblings, Emily nevertheless continues to anticipate issues incorrectly.  Almost illustrative of something that Hank Green recently said, “I think that the longer you know someone, the easier it is to think that you know what they think all the time and that leads to really bad communication.  When you’re like, I already know how you feel about this, so I’m not even going to ask.”

Ms. Eagland does not portray Emily as a heroine, nor does she gloss over the young woman’s courageous, self-less acts.  Feisty and fierce, Emily does not always choose the best battle to fight, in spite of being considerate and thoughtful.  Wise and well-informed on the one hand, naïve and somewhat sheltered on the other; I found it interesting and intriguing to witness her acquisition of knowledge.  I loved that she changed her mind quickly, compulsively to adopt and embrace the completely opposite opinion.

Engaging and exhilarating, Emily takes center stage but the spotlight certainly shines on the charismatic cast.  Curious and considerate, interacting with different people has a ripple effect as Emily first defends, then reconsiders her stance on practically every topic from religion to women’s role in society.  As it turns out, any preconceived notions are irrelevant.  The World Within is simply an interesting story about an intriguing young lady.