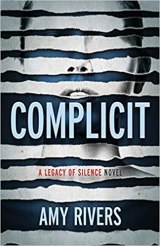 
I had heard about this book and I was looking forward to reading it and expected to like it.  In Complicit we meet Kate Medina, a former prison forensic psychologist, who was doing work she loved until she was brutally attacked by a prisoner.  Battered and bruised she returned to her hometown of Alamogordo, NM and has been there for the past five years.  Those five years have been difficult – her mother died, her father is gravely ill, and she is estranged from her only sibling, a sister who moved to another state, does not stay in touch, and refuses to return to Alamogordo.  Kate is now a school psychologist – an ok job but not what she trained for and loved doing.  Add to that she has had to face Roman, her best friend when they were both teenagers.  The last time they saw each other before Kate left, they found a burned car on the beach with a body in it.  Unfortunately, Roman has never gotten over the fact that Kate went away to college without even a goodbye and never returned until five years ago and they have barely seen each other since her return.

Fast forward to present day and Kate is trying to work with a high school student who is hesitant to talk with her but who is clearly very troubled.  Shortly after trying to talk with that student, another student disappears and Roman who is now a detective with the town’s police force, visits Kate’s office to talk with her about the missing student.  Needless to say, it’s an awkward conversation both due to their history and Kate’s concern about her students’ confidentiality.

From there we begin to learn that something very frightening is happening to women and girls in this relatively small town and that a lot of people seem to know about it including, Kate eventually finds out, someone very close to her and it soon becomes clear to her that she is not safe in this town when she receives anonymous notes demanding she leave.

As I said, I was prepared to like this novel based on others’ opinions.  I wish I could say I liked it, but I didn’t.  I found it very uneven.  On the one hand, parts of it are interesting and move very quickly but other parts are drearily plodding.  The main characters are not fully realized and are two dimensional; the demeanor of each is generally angry and rigid with occasional glimpses of less hostile behavior.  I should also warn you that the story includes dialogue about brutal sexual assaults and abuse of girls and women.

One thought on “Book Review: Complicit by Amy Rivers”