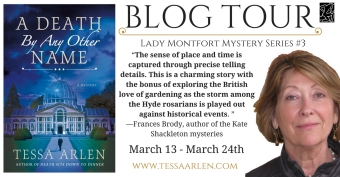 The elegant Lady Montfort and her redoubtable housekeeper, Mrs. Jackson, investigate a murder among a group of amateur rose-breeders while the idyllic English summer days count down to the start of WW1.

When Mrs. Jackson receives a visit from a cook who believes she was an indirect witness to murder from a poisoned dish of breakfast kedgeree Lady Montfort promises to do what she can to clear the cook’s name, and contrives an invitation to Hyde Castle, the home of a self-made millionaire, to investigate a murder of concealed passions and secret desires. With the help of the invaluable Jackson Lady Montfort sets about solving the puzzle surrounding the death of the rose society’s most popular member and discovers a villain of audacious cunning among a group of mild-mannered, amateur rose-breeders.

While they investigate, the headlines bring news of the continuing conflict in Prussia following the assassination of the heir to the Austrian empire. As each day brings more threatening news and the very real fear that Britain will be drawn into war Lady Montfort and Mrs. Jackson must race the clock to solve the mystery before Britain declares on Germany.

Edith Jackson, housekeeper to Iyntwood House, home of the Earl and Countess of Montfort, reluctantly accepts the task of investigating yet another suspicious death with her employer, Lady Montfort. Clementine, on the other hand, has all the enthusiasm of one who loves to detect and knows she’s good at it, with the help of her fellow sleuth. They make a great upstairs-downstairs team but this case is a little different from their first two adventures because they have to create a reason to go to the house in question, Hyde Castle.

You wouldn’t think rose-breeders would be a shifty lot with murderous inclinations but, apparently, at least one of the rosarians gathered at Hyde Castle might be involved in the death of Rupert Bartholomew. Or could his murder have something to do with his business, the manufacture of Bartholomew’s Bully Beef? Or is some other motive behind the purported accidental food poisoning?

Lady Montford and Mrs. Jackson set about their task with the determination and clear thinking they’ve developed in the past and both are very good at recognizing what information is important albeit from widely different sources. Gardening knowledge comes into play as well as a small touch of the occult and a plethora of characters, suspect or no, provide plenty of possibilities. Hovering over everything is the looming declaration of war, bound to come soon following the buildup of high tensions after the assassination of Archduke Franz Ferdinand.

As with the first two books in this series, I was completely taken by our two indefatigable sleuths but also by the other players, the English country setting, the times and a lively puzzle to be solved. Ms. Arlen includes a most welcome cast of characters and I especially enjoyed the presence of a real person, the highly regarded garden designer, Gertrude Jekyll. I’m even more a fan of this series than I already was and am only sorry I have to wait so long for the next book.

TESSA ARLEN is the author of Death of a Dishonorable Gentleman. She is the daughter of a British diplomat, and had lived in or visited her parents in Singapore, Berlin, the Persian Gulf, Beijing, Delhi and Warsaw by the time she was sixteen. She came to the U.S. in 1980 and worked as an H.R. recruiter for the Los Angeles Olympic Organizing Committee for the 1984 Olympic Games, where she interviewed her future husband for a job. She lives in Bainbridge Island, Washington.

For more information please visit Tessa Arlen’s website. Read Tessa Arlen’s blog at Redoubtable Edwardians. You can also connect with her on Facebook, Twitter, and Goodreads.

“Arlen recreates a richly detailed pre-WWI England,
seamlessly weaving historical events and people
into her well-written third Lady Montfort mystery…
Lovers of traditional English country house mysteries
will enjoy this story very much”
―Publishers Weekly on A Death by Any Other Name

“Arlen’s delightful mix of upstairs and downstairs
conveys the complexities of a hidebound class system
on the verge of change…. The narrative is helped along
by a slew of red herrings, a fast-moving plot,
and fine descriptive passages.”
―Historical Novel Society on A Death by Any Other Name

11 thoughts on “Book Review: A Death by Any Other Name by Tessa Arlen”