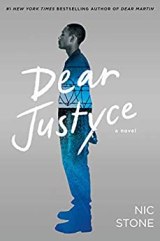 Dear Justyce by Nic Stone is the Young Adult, Realistic Fiction companion to Dear Martin. But, please do not pass it by if you’ve not yet met these characters. Dear Justyce does just fine on its own.

Quan is, once again, in Juvenile Detention. The difference: this time…he actually may not have committed the crime for which he is accused. Yeah, he panicked when the very officer that killed Manny swung his weapon toward Quan and his crew. He even pulled his nasty little .22. And brilliantly, he left it behind. Along with the cop’s body.

Hell, he even confessed…sort of.

Quan knew his rights and stated that he chose to remain silent. Several times. But the police had kept talking. And moving Quan from his holding cell to the tiny room with two-way mirror. And back.

Meanwhile, his friend from play-ground-days, Justyce, is working through his first year at Yale. They’re too tight for Quan to feel (much) bitterness. Plus, Justyce had given Quan his notebook filled with the letters he wrote to the late Dr. King, in lieu of a diary. The letters revealed issues that Quan hadn’t known his friend struggled with. Quan takes to writing to Justyce.

Turns out, the writing is therapeutic for Quan and intriguing to Justyce. He senses issues and injustices in Quan’s arrest and processing. The more he listens, the more Justyce believes that Quan’s case is not being taken seriously. Justyce makes it his personal goal to right this wrong.

While the story is as hopeful as it is heart-breaking, the hard truths are going to haunt me. I am so appreciative that Ms. Stone told Quan’s story and I’m pleased that I pre-ordered several copies. Now I can keep one for myself and still add this gem to some of my favorite high-school classroom libraries. 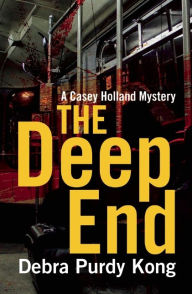 Casey Holland, the protagonist in this series by Debra Purdy Kong, in which this is the fourth entry, “a criminology student and an experienced security officer,” has just started her first shift as a volunteer at Fraserview Youth Custody Center, a juvenile detention facility just outside of Vancouver housing 25 youngsters, supposedly only for a few days each.  Soon after her shift starts, she is startled to find that a friend’s 15-year-old grandson, Justin, is a resident there.  Then, later on that same evening, Mac Jorgenson, the 230-pound man in his late fifties and the director of the facility, dies right in front of Casey, from an apparent heart attack, although it develops that the circumstances were suspicious.  A helluva way to start a new job – – and that’s only the beginning.

Casey’s life is not without its own drama:  Her boyfriend, Lou, who she’d known for over ten years, had moved in with her two months ago.  32 years old, she is the legal guardian of a 13-year old girl, Summer, a “surly, self-absorbed teen,” whose mother is incarcerated, serving a life sentence for 2nd-degree murder.

Fraserview is somewhat shabby, with insufficient staff in the evenings, and is rumored to be on the verge of closing within the next several months.  Casey is a criminology student and an experienced security officer, but finds herself challenged here when there is a second death and rumors of illegal activity, and is fearful that Justin may be either involved, or in danger himself.  There is no lack of suspects, and Casey feels it her duty to try to find out the truth, fearful for Justin’s safety.

Casey is a very interesting protag, and though I had not read any of the prior entries in the series, the author fills in the background and the history of the characters, so that was not a problem, and I found the tale very absorbing.