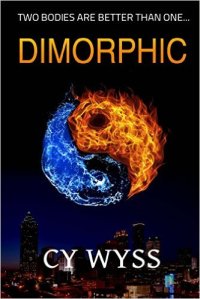 It’s easy to become a superhero.

First, discover a superpower. It might take a while to get used to, though — especially if it’s something as weird as being your twin brother half the time.

Second, recruit a sidekick. Or, two. It’d be nice if they weren’t a pyromaniacal sycophant and a foul-mouthed midget, but you get what you get.

Third, and most important, hire a mentor — preferably not a vicious mobster with a God complex, however, this may, realistically, be your only choice.

Finally: go forth and fight crime. Try not to get shot, beaten, tortured, or apprehended in the process.

I’m a sort of 2/3 fan of the superhero world. I love some of the movies but not all, I love some of the TV shows but not all and I never read graphic novels and comic books. Haven’t read one of those since I was a teenager which, believe me, is not recent times. When I was offered the chance to read Dimorphic, I thought this could be a fun new way to partake of a little superhero action and, as it turns out, I was right.

Every superhero theme has to have a hook, a power that’s not commonly held, and it has to be used for good or evil. The superhero involved can have misgivings from time to time and question whether what he or she is doing is the right thing but, essentially, there’s no mixture of good and evil; it’s one or the other.

The hook here is that Judith can occupy her twin brother Ethan’s body and take advantage of his strength and physique to fight crime. That in itself is a nifty ability but the author makes it much more interesting by having Judith still be her normal clumsy self even while she’s Ethan. She also surrounds herself with a rather motley crew of sidekicks and manages to involve the FBI.

Mayhem and madcap action ensue and there’s much fun to be had in Dimorphic.  I enjoyed it a lot but, dang, I need to read something a little calmer now 😉

Note: a word of caution—if you’re particularly sensitive to vulgar language, this might not be a good choice for you. There’s a lot of strong language including the f-bomb and, while I usually avoid books that are rife with obscenities, it somehow didn’t bother me too much this time.

I live and write in the Indianapolis area. After earning a PhD in Computer Science in 2002 and teaching and researching for seven years, I’ve returned to the childhood dream of becoming an author. I better do it now because I won’t get a third life.

Behind me, I have a ton of academic experience and have written about twenty extremely boring papers on query languages and such, for example this one in the ACM Transactions on Databases. (That’s a mouthful.)

Now, I write in the mystery/thriller/suspense genres and sometimes science fiction. I know for some people databases would be the more beloved of the options, but for me, I finally realized that my heart wasn’t in it. So I took up a second life, as a self-published fiction author.

Online, I do the Writer Cy cartoon series about the (mis)adventures of researching, writing, and self-publishing in today’s shifting climate. I also love to design and create my own covers using GIMP. 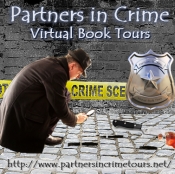