Celebrity TV anchor Georgia Glass wants out of Denver and far away from her obsessed fan. Set to host her own investigative crime show in LA, she’s surprised to inherit a Victorian house in Aspen from a mysterious uncle she never knew. But while exploring the gothic property, she discovers the frozen corpse of a missing heiress.

Georgia’s journalist instincts kick in and she is determined to help police track down the killer. But by investigating the murder, has she made herself the killer’s next target?

Can Georgia help solve the case before she becomes the next victim? Or will the stalker that followed her to Aspen get her first?

Now I See You is a fast-paced whodunit set amidst the spectacular scenery of Aspen, Colorado, and the first book in the suspenseful Mountain Resort Mystery series.

Georgia Glass is an interesting woman and I was particularly struck by a random thought she has, that she has “vague memories” of her visits to Aspen after just ten years. That makes her seem rather shallow but I actually think it might be a kind of commentary on so many people today whose lives are so filled with information flooding their brains from all directions. TV journalists especially may find their attention and focus driven from one story to the next, causing memories to be more fleeting than in less frenetic times. Hmm…something I’ll want to think more about.

Besides finding a body in her newly inherited property, Georgia is also recovering from the stress of having a devoted fan who turned into a stalker. That situation seems to be under control but no journalist worthy of the name could resist looking into the presence of a dead body practically at her feet. She’s new in town but makes connections quickly, including with a local police detective and it isn’t long before she comes to the attention of a serial killer who already has committed several murders.

I figured out most of the salient facts faster than I expect to in a true whodunnit, as this has been billed, but the author has crafted a nicely suspenseful story. Detective Jack Martin will be back in the next book, set in Vail, and I’m looking forward to seeing him again.

Shannon Work grew up in Del Rio, a border town in the dusty wilds of West Texas. When she graduated from high school, she moved east to College Station and graduated from Texas A&M University with a bachelor’s degree in Journalism and a master’s degree in Land Economics and Real Estate.

Most of her working life has been spent developing real estate, earning a national Best in America Living Award for one of her developments. After two failed starts at writing a novel while raising three kids and working, she retired to pursue her dream of writing mystery novels full time.

Shannon and her husband are recent empty nesters and split their time between Houston, Texas and Telluride, Colorado. Always with their laptops and dogs in tow. 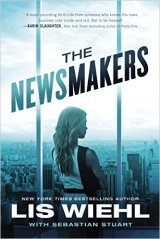 Readers will have a difficult time putting down Lis Wiehl’s first mystery featuring a talented but fragile news reporter up against a horrific plot.

Erica Sparks is a news reporter who just landed her dream job with Global News Network. She leaves her eight year old daughter Jenny with her ex husband and is determined to succeed at her new, high pressure job. Recruited from a small New Hampshire station, she’s an attractive blonde but not overly polished, and has a certain connection with the viewer. Prior to her New Hampshire job, she was fired for on-air intoxication at a Boston station, but has been sober for almost two years.

Nylan Hastings, the owner of Global News, is a manipulative and dangerous man. “He loves his rage. It’s his best friend and has been since he was a little boy.” He’s looking for a star and all he sees is a parade of mediocrity. Global News is a new station bought by Hastings with his billions, profits from the sale of a video game he developed. He saw the audition tape of Erica and hired her as his new rising star.

On her first day on the job she snags an interview with the Duchess of Cambridge in Battery Park. While she is setting up for the duchess a Staten Island ferry crashes into the seawall and a man is crushed between the boat and the seawall. Others are injured. Erica’s camera is rolling and she scoops the other networks. Weeks later, another tragedy strikes and again Erica is on the scene with her cameras.

Is it just coincidence, or is Erica under a black cloud? The network make up artist warns her that Hastings likes to play games and pit employees against each other. When another reporter grabs her story, her producer and possible romantic interest tells her that it was done with Hastings approval.

The Newsmakers is a thriller set in the world of television news. It’s fast paced and hard-edged. It doesn’t cross into the romantic suspense genre, but readers who have enjoyed Hank Philippi Ryan’s books will want to put this author on their “to read” lists.

The author is a Fox News Channel legal analyst. She is the author of the Triple Threat series, the East Salem trilogy, and the Mia Quinn mysteries.

One of the crucial elements of this series is its platform. It’s a platform the author knows well and uses to full effect. It’s the reality and atmosphere of the television news operation. Riley Spartz, newshen of a local television station in the Twin Cities of Minnesota, sometimes is a bit of a loose cannon. It drives her bosses up the wall. In today’s broadcast television business, tension and often frantic pursuit of ratings rules. Ratings are tied directly to advertisers and what they can be charged for air time.

Spartz is a veteran reporter, well aware that her skills and experience are being constantly measured against younger, cheaper, upcoming talent. It pushes her to extend herself and sometimes into mortal danger.  Author Julie Kramer has a strong background in television new production and she uses that experience to excellent effect. The novel rings with authenticity.

Almost accidentally Riley discovers an odd chalk outline around the body of a dead woman in south Minneapolis. She’s chasing a solution to the murder of a young woman when Riley, against her boss’s wishes, learns of her own personal connection to the dead woman. That connection gives her more incentive to follow the story. Almost as an aside, on a hot day in Minneapolis she comes across a dog locked in a truck in a parking lot. Riley’s instincts kick in and a live feed from a liquor store parking lot sends ripples through the community and incenses the dog’s owner. Between the two stories, Riley has a lot to juggle. And then violence flares all around her.

The novel is cleanly and smoothly written, with a powerful forward thrust that grabs the reader and contributes to its page-turning intensity. The characters are multi-dimensional and interesting. One of the author’s strengths is her ability to surprise us while retaining the essential dimensions of the characters. Killing Kate is a terrific novel and I’m looking forward to the next in this series.