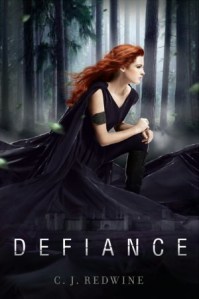 Within the walls of Baalboden, beneath the shadow of the city’s brutal leader, Rachel Adams has a secret. While other girls sew dresses and obey their male Protectors, Rachel knows how to survive in the wilderness and deftly wield a sword. When her father, Jared, fails to return from a courier mission and is declared dead, the Commander assigns Rachel a new Protector, her father’s apprentice, Logan—the same boy Rachel declared her love for two years ago, and the same one who handed her heart right back to her. Left with nothing but a fierce belief in her father’s survival, Rachel decides to escape and find him herself. But treason against the Commander carries a heavy price, and what awaits her in the Wasteland could destroy her.

At nineteen, Logan McEntire is many things. Orphan. Outcast. Inventor. As apprentice to the city’s top courier, Logan is focused on learning his trade so he can escape the tyranny of Baalboden. But his plan never included being responsible for his mentor’s impulsive daughter. Logan is determined to protect her, but when his escape plan goes wrong and Rachel pays the price, he realizes he has more at stake than disappointing Jared.

As Rachel and Logan battle their way through the Wasteland, stalked by a monster that can’t be killed and an army of assassins out for blood, they discover romance, heartbreak, and a truth that will incite a war decades in the making.

Sometimes, it’s a little difficult to separate our expectations of fictional characters versus real people and that had some effect on me as I was reading Defiance. Rachel, the heroine of the story, is brave, smart, purpose-driven and, well, defiant. Rachel is also foolhardy, overly impulsive, overly dramatic and frequently irrational.There were many times when I wanted to scream at her and shake her till she’d go cross-eyed and then something would happen to remind me.

Rachel is a teenager. She lives in a terrible world and has suffered unimaginable losses yet still wants to fight the good fight…but she is still a teenager.  A girl who is a few months shy of her 17th birthday cannot fairly be required to always act with reason and forethought, even in a fictional world.

Then there’s Logan, only two years older than Rachel but her polar opposite in personality and demeanour. Logan actually verges on being way too perfect but his redeeming quality, if you can call it that, is that he becomes so focused that he’s oblivious to what’s going on around him. That makes him human and likeable even while the reader wants to tell him, “Hey, dimwit, pay attention to what she’s about to do!”

So, yes, these two are often annoying past description and yet their story draws the reader in and it’s impossible to just walk away, at least it was for me. I needed to know more about them and about Jared and his secret. The secondary characters are just as compelling, especially Melkin, Commander Chase and the brother and sister team of Quinn and Willow and how could anyone not want to find out the truth about the Cursed One?

If there is a shortfall, it’s in Ms. Redwine‘s worldbuilding. Baalboden appears to be very medieval but is it really or has humanity regressed to that period? Why are there separate city-states? What happened to throw society into such disarray? Is the Protector system and the related Claiming ceremony based on current treatment of women in certain parts of our world or something else entirely? Is the Cursed One rooted in magic, related to dragons, or something much more horrific?

Alas, we’ll have to wait for the next book to see if some of these questions will be answered. I thoroughly enjoyed Defiance and will look forward to the continuation of Rachel’s and Logan’s tale.