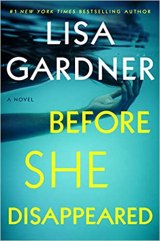 Before She Disappeared is a stand-alone and well worth a read. I devoured it in a couple of days.

Frankie Elkin is a recovering alcoholic who spends her days searching for missing people, people the police have given up searching for after months of no new info or clues. Frankie believes not being associated with the police gives her an edge, allowing her to approach family and friends of the missing person, meeting them on a less pressure-filled level, to possibly unearth a snippet of new information that might lead to a breakthrough.

She’s come to Boston, to an area known as Mattapan, the largest Haitian neighbourhood, to meet the aunt and brother of Angelique Lovelie Badeau, a teenager who, after leaving school one Friday afternoon eleven months ago hasn’t been seen since.

Frankie gets a job as a bartender at Stoney’s, a local popular hangout. The job comes with a room above the pub. Eager to get started she makes her way to the apartment where Guerline Violette, Angelique’s aunt and brother lives. After initially meeting some resistance, Guerline agrees to talk to her.

Frankie doesn’t ask for money, she only asks for truthful answers to her questions. Aware she’ll get some push back, she also insists on contacting the Detective in charge of the case. Frankie makes no bones about the fact that she might not find anything, but she begins with Angelique’s High School best friends, Kyra and Marjolie. After talking to the two girls Frankie is sure they know more than they are saying.

As her investigation proceeds, with a possible sighting of Angelique… another teenage girl goes missing raising the stakes. While Frankie steadily makes progress, she is painfully aware that there are forces working against her, who are prepared to do anything to stop her.

Frankie is a strong, brave yet conflicted woman, carrying some painful baggage she’s unwilling to share, which makes it easy to get swept along with her as she fights to uncover the truth.

Like me, you’ll probably read late into the night to the exciting conclusion.

Check it out…. You’ll be glad you did.