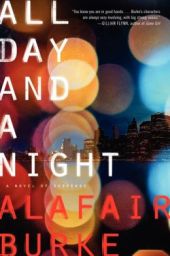 Ellie Hatcher, a detective with the NYPD, and her partner, Jeffrey James (“J.J.”) Rogan, working homicide in the 13th Precinct, return in the fifth entry of this wonderful series by Alafair Burke.  The pair have conflicted reactions when Ellie’s boyfriend, ADA Max Donovan, assigns them, on behalf of the Conviction Integrity Unit, as a “fresh look” team to look into the 18-year-old murder conviction of Anthony Amaro, a man who had been put away as a serial killer and is serving a life sentence without chance of parole (in prison slang, “all day and a night,” “all day” simply being a life sentence).  The problem arises when a Park Slope psychotherapist is found murdered in a manner identical to that of the women Amaro had been accused of killing [those having apparently all been working prostitutes], and the police start receiving anonymous tips.  Things get more complex when there is a question about the possibly coerced confession made by Amaro to one of the murders, the fallout of that being a review of all ‘confessions’ elicited by that same cop, again reminiscent of something along similar lines in New York in recent years.

The rather obscure DA unit handles cases of “wrongful conviction,” of which there have been many successful ones over recent years.  The attorney who represents Amaro here is Linda Moreland, a celebrity trial lawyer with 8 exoneration wins under her belt, who in turn contacts Carrie Blank, a former law student of Moreland and now an attorney with a prestigious law firm who is the step-sister of one of the victims, killed many years ago in Utica, NY.  Carrie can’t refuse, hoping she can gain some insight into her step-sister’s murder.  The novel’s point-of-view alternates accordingly, with the parallel investigations.

The writing completely captures the toxic atmosphere currently plaguing the US and, especially, New York City, with regard to community vis-à-vis police relations, and the stop-and-frisk policy just recently changed by New York’s current mayor.  The case revolves around both venues, the upstate New York area where most of the murders occurred and where the most recent victim once worked, as well as the New York area, now home to Ellie [originally from Wichita, Kansas], Rogan, Max and the author as well.  The novel moves ingeniously and quickly to a terrific conclusion, with several unexpected twists and turns along the way.  The author gets everything right, with many ‘ripped from the headlines’ story lines, and the book is highly recommended.