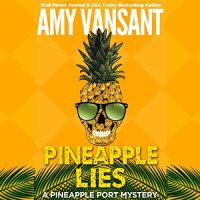 Growing up in one of Florida’s age-55-plus communities, Charlotte never expected life to be wild. Golf cart racing with her surrogate mothers Mariska and Darla was about as nutty as life got… until she found the hot pawnbroker’s mom buried in her backyard.

Armed with nothing but her wits, Pineapple Port’s questionable cast of characters and a growing crush, Charlotte is determined to solve the mystery of Declan’s mother’s murder.

Hey, at least this guy’s skeletons aren’t in his closet.

Sometimes it takes me what seems like forever to get around to reading a book I really wanted in the beginning. It isn’t usually because I lose interest, although that occasionally happens. Mostly it’s because I am constitutionally incapable of controlling my TBR hoard, a victim of my own book greed.

The result of this is that, once in a while, I’m completely blown away by a book I’ve put off for no good reason other than having too many books to read (!) and then I kick myself for missing out for way too long and that’s what happened with Pineapple Lies. It took me approximately 30 minutes of the audiobook to decide this was going to be a terrific read for three reasons:

1. I love the players and the premise of a youngish woman who lives in a retirement community in Florida being the sleuth. I live in Florida (but not in a retirement village) so I was already predisposed to like the setting and Ms. Vansant has created a bunch of characters who are a little stereotypical but in a very good way and who each bring something to the table, so to speak.

2. The mysteries are entertaining puzzles with the main one, the discovery of the local pawnbroker’s mom buried in Charlotte’s yard, keeping my little gray cells working while the side threads provide plenty of humor and distraction. The author’s pacing is especially good and not once was I the least bit let down as the plot progressed. There’s a budding romance, too, but it’s not obtrusive.

3. I’ve found an audiobook narrator to add to my list of favorites. Rosemary Benson is, in a word, amazing. Her ability to create individual voices is beyond that of most truly good narrators and I’ve listened to some I consider among the best. I’m very sure I would have fallen in book love with Pineapple Lies anyway but Ms. Benson brings it all to life.

So, big kudos to both author and narrator—this book is going on my list of best books read in 2021 and now we’ll see if the trend continues with the second book, Pineapple Mystery Box. 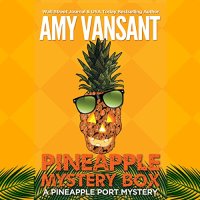 When a giant inflatable Halloween witch goes missing in the Pineapple Port retirement community, Charlotte’s eager to nab the culprit. Before she can lift a fingerprint, someone threatens to kill a new neighbor who looks like an adorable Pomeranian but possesses a disturbing talent for revenge. Moments later, a stranger demands the return of a mysterious wooden box – or else.

Charlotte’s boyfriend, Declan, isn’t having a great morning either. His calculating ex-girlfriend has returned to claim she’s the rightful owner of his pawn shop. She’s livid he’s found a new lady, too.

Eh. Things could be worse. At least Charlotte doesn’t know that a mojito-swilling killer who fed his grandmother to a cat is on his way to Pineapple Port!

Some series suffer from sophomore slump but this one most certainly does not. Charlotte has decided that her calling is to be a private investigator after her achievements in the previous story and her senior citizen community is more than willing to send cases her way, things like who stole Darla’s Halloween witch and who is moving outdoor decor from one yard to another.

When pawnbroker Declan’s former girlfriend threatens to make his life miserable and a peculiar box draws unhealthy attention, he thinks things are weird enough but they can’t explain his uncle Seamus’s bizarre behavior. Throw in a potentially homicidal newcomer and Charlotte suddenly has a full detecting plate.

Following up on the first book, Pineapple Mystery Box is just as clever and filled with humor and I appreciated narrator Rosemary Benson’s talents every bit as much. I highly recommend this and I’ll soon be starting the next audiobook, Pineapple Puzzles. 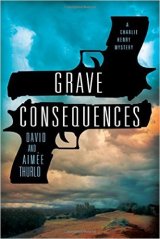 Charlie Henry and his sidekick, Gordon, are ex-Special Forces soldiers, now partners in the FOB Pawnshop in Albuquerque, NM, but civilian life hardly is a retiring one for either of them. Trouble seems to find them on a regular basis in this second of a series of action-packed adventure.  Mysteries and mischief seem to just walk into their store.  In this latest story, it begins when a young woman pawns a valuable Navajo necklace.

Soon three gunmen enter the pawnshop in an attempt to retrieve the bracelet. And a shootout results in one of them dead and another wounded, with Charlie and Gordon none the less for wear, but off and running to find out what prompted the invasion.  This leads to a wild goose chase all around the New Mexico city with violence galore until they learn what lies behind they mystery of the bracelet and the death of its creator.

While the plot follows a traditional pattern of a police procedural, and there are plenty of cops involved, with enormous assistance from Charlie and Gordon, the novel really centers on the swashbuckling duo and their antics, rather than detecting clues to solve a crime or murder.  And there is plenty of this type of action to satisfy the most bloodthirsty reader. 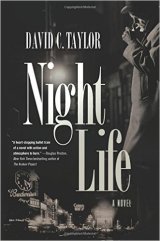 Michael Cassidy is a detective in New York City’s midtown precinct during the 1950’s in the era of McCarthyism.  He is a dramatic character drawn in the classic mold of a tough hombre.  His godfather is the mafia stalwart Frank Costello, his father an immigrant who started with less than nothing and rose to become a well-known Broadway producer.  Cassidy picks up a murder case, the victim actually a dancer in the show his father is producing and now in rehearsal.

One murder leads to three others, and Michael becomes involved in a web of conspiracies involving the FBI and the CIA, and with Roy Cohn and J. Edgar Hoover, no less.  Cassidy is taken off the murder case by higher-ups, but true to fashion, he persists.  Faced with complications of monumental proportions his doggedness continues.

This novel, a debut, is excellent.  The background of New York City just after World War II is superb, and the atmosphere of the Red Scare years and McCarthyism is very real, especially for those who lived through the period.  The book has much to recommend it, and indeed is highly recommended.