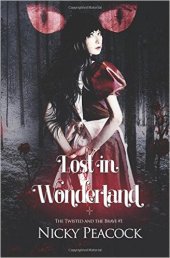 Monsters, serial killers, and imaginary friends—being a Wonderlander can be murder… Once upon a time, Kayla was lost. Then she found Wonderland, but not the one you know. Run by ex-government agents and funded by an eccentric Silicon Valley billionaire, this Wonderland is the name of a collective of highly trained vigilantes who hunt serial killers. Now Kayla, aka Mouse, works tirelessly alongside her fellow Wonderlanders, Rabbit and Cheshire, baiting dangerous murderers. But even her extensive training hasn’t prepared her for the return of her older brother…

Shilo has spent most of his life in an insane asylum, convinced his mother was abducted by a sinister Alaskan monster who lures the lost away to feast upon their flesh. And now he’s certain that his sister is in the same monster’s crosshairs. But if Shilo is going to save what’s left of his family, he’ll have to convince his sister that maybe, just maybe, we’re all a little mad.

The retelling of fairy tales has become almost a cottage industry but, for me, the fun is in discovering how a particular author approaches the task. Now, Wonderland is not, precisely speaking, a fairy tale but, hey, it’s close enough and I quite simply loved all the oddities and eccentricities, the madness, to be found in any Wonderland, even one that involves vigilantes and serial killers. That does mean there’s a certain amount of violence and the tale is quite dark so the squeamish may want to think before reading Lost in Wonderland. Still, I believe many will like Kayla a great deal and appreciate the story as much as I did. 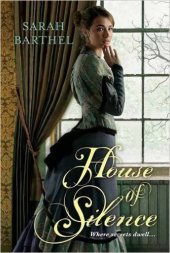 Oak Park, Illinois, 1875. Isabelle Larkin’s future—like that of every young woman—hinges upon her choice of husband. She delights her mother by becoming engaged to Gregory Gallagher, who is charismatic, politically ambitious, and publicly devoted. But Isabelle’s visions of a happy, profitable match come to a halt when she witnesses her fiancé commit a horrific crime—and no one believes her.

Gregory denies all, and Isabelle’s mother insists she marry as planned rather than drag them into scandal. Fearing for her life, Isabelle can think of only one escape: she feigns a mental breakdown that renders her mute, and is brought to Bellevue sanitarium. There she finds a friend in fellow patient Mary Todd Lincoln, committed after her husband’s assassination.

In this unlikely refuge, the women become allies, even as Isabelle maintains a veneer of madness for her own protection. But sooner or later, she must reclaim her voice. And if she uses it to expose the truth, Isabelle risks far more than she could ever imagine.

Desperation sometimes leads to dire measures and none is more dire than pretending mental illness and landing in an asylum. In the days when treatment of mental patients was something close to horrific, such an escape would have been even riskier but Isabelle certainly couldn’t have expected to find friendship with such a woman. That in itself leads to some interesting conversations and behaviors but the overall tone wasn’t as ominous as it should have been considering the setting and the times. The appeal of the story was further lessened for me by somewhat stilted language that could have been “softened” just a little to make it more amenable to the modern reader and yet there were also occasional anachronisms that simply didn’t work. Overall, while I don’t really consider this to be one of the better historical fiction novels I’ve read, I do see potential for future works from Ms. Barthel.

Thanks to his relationship with the ancient Druid Atticus O’Sullivan, Oberon the Irish wolfhound knows trouble when he smells it – and furthermore, he knows he can handle it.

When he discovers that a prizewinning poodle has been abducted in Eugene, Oregon, he learns that it’s part of a rash of hound abductions all over the Pacific Northwest. Since the police aren’t too worried about dogs they assume have run away, Oberon knows it’s up to him to track down those hounds and reunite them with their humans. For justice! And gravy!

Engaging the services of his faithful Druid, Oberon must travel throughout Oregon and Washington to question a man with a huge salami, thwart the plans of diabolical squirrels, and avoid, at all costs, a fight with a great big bear.

But if he’s going to solve the case of the Purloined Poodle, Oberon will have to recruit the help of a Boston terrier named Starbuck, survive the vegetables in a hipster pot pie, and firmly refuse to be distracted by fire hydrants and rabbits hiding in the rose bushes.

At the end of the day, will it be a sad bowl of dry kibble for the world’s finest hound detective, or will everything be coming up sirloins?

There are a handful of series that I always read by listening because I’m so entranced with the narrator and the Iron Druid Chronicles is one of those. Further, I also always get the ebooks because there are foreign and/or mythological names and terms that I can’t always pick up by listening so I play the audio books and then use the ebook to verify those words.

Besides the delights of Luke Daniels‘ narration, Oberon, a goofy Irish wolfhound, is one of my all-time favorite characters. Oberon talks to his druid pal, Atticus, and is totally charming while being very dog-like, focused largely on his next meal, and he has an eye for the ladies, particularly of the French poodle variety. When he finds out that a nefarious ring of dognappers is operating in the Northwest, he naturally feels it’s his duty to sniff out these bad guys so off he goes, with a little help from his friends. What ensues is an entertaining story with a satisfying resolution and I smiled all the way to the end. As always, Oberon’s voice alone had me going and I highly recommend readers who haven’t tried the Iron Druid Chronicles by Kevin Hearne listen to this tale for a taste of the joy you’ll get from these audio books. 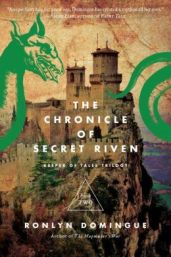 This story, which is Book 2, introduces Eve (Secret) Riven, as a small quiet child. So quiet, she never speaks. When she is only four years old Secret discovers she can talk mind-to-mind to plants, insects, and animals—and they can speak back to her.

Secret’s mother has the uncanny ability to speak and translate arcane languages and spends her time working for a single patron whose translation needs take up all her time, leaving little for Secret. And although Secret’s father dotes upon her, he is often away from home on business. The child is very lonely.

The story follows Secret through her school years, where she graduates with honors, until she takes a job with Fewmany, an enormously wealthy inventor and entrepreneur. His background is obscure and mysterious.

During this time, Secret makes a few friends. Nicholas, who will become king of the nation, for one. Another is Old Woman, who lives in the forest reached only through a mysterious tunnel, and gives the child the love for which she yearns. And there is Cyril the squirrel, who first led the child through the mysterious hollow tree that takes her into a peaceful land where time stands still.

The world-building in the story is breathtaking. The characterization is beautifully developed. The writing is lovely. The plot? Well, it moves very slowly, allowing time for all the above mentioned features to progress. Although Secret’s story is a fine one, in the end, the book left me a bit unsatisfied. I wanted to see some resolution, but instead am left hanging, presumably to await the third book of the trilogy.

Reviewed by Carol Crigger, May 2014.
Author of Three Seconds to Thunder.