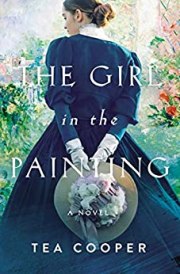 A young prodigy in need of family.

A painting that shatters a woman’s peace.

And a decades-old mystery demanding to be solved.

Orphan Jane Piper is nine years old when philanthropist siblings Michael and Elizabeth Quinn take her into their home to further her schooling. The Quinns are no strangers to hardship. Having arrived in Australia as penniless immigrants, they now care for others as lost as they once were.

Despite Jane’s mysterious past, her remarkable aptitude for mathematics takes her far over the next seven years, and her relationship with Elizabeth and Michael flourishes as she plays an increasingly prominent part in their business.

But when Elizabeth reacts in terror to an exhibition at the local gallery, Jane realizes no one knows Elizabeth after all—not even Elizabeth herself. As the past and present converge and Elizabeth’s grasp on reality loosens, Jane sets out to unravel her story before it’s too late.

From the gritty reality of the Australian goldfields to the grand institutions of Sydney, this compelling novel presents a mystery that spans continents and decades as both women finally discover a place to call home.

Immigration is a heavily-weighted word these days and has always held significant meaning in America’s history and it is no less so in Australia. That country’s beginnings are rooted in the creation and development of a penal colony and its early, mostly white, settlers frequently either had a prison-based past or had run to this remote land to escape secrets. Once again, Ms. Cooper makes use of multiple timelines, bringing divergent yet connected stories together, and does so to good effect.

In 1906, the Quinn siblings are successful business leaders who are generous in sharing their good fortune and plucking Jane Piper from an orphanage is exactly the sort of thing they like to do to help someone else make the most of their own abilities and strengths. Jane’s prodigious mathematical talents position her to become useful to the kind brother and sister but it’s something from Elizabeth’s past that triggers Jane to learn more about the Quinns and the secrets Michael has been keeping to himself for decades. By now a trusted partner, Jane is driven to look for the hidden truths that lie in the Quinns’ own emigration as children from England to Australia all those years ago and the mysteries she unearths are compelling history in themselves.

Tea Cooper is an Australian author of historical and contemporary fiction. In a past life she was a teacher, a journalist and a farmer. These days she haunts museums and indulges her passion for storytelling.

When a book begins with the protagonist having just dealt with a major panic attack by crushing a porcelain salt shaker with his teeth, you can expect what follows to be a bit strange. And what does ensue exceeds that description in spades. Peter Blankman, age seventeen, is a twin and a mad math genius. He’s also bullied unmercifully by three classmates at his English high school. His only protection is his older, by eight minutes, sister Bel who is no slouch in the brains department herself.

Peter has been dealing with irrational fears and panic attacks for as long as he can remember. His mother is a world famous scientist and his absent father a mystery. All Peter and Bel know is the tidbits their mother drops on occasion, but the overarching message has always been that Dad was utterly evil and the less they know, the better off they’ll be.

A few hours following his attack, he, Bel and Mom are off to the Natural History Museum where Mom’s to receive an award for her work. Peter does his best to hold it together, but as the moment approaches for things to start, he loses it and bolts, running recklessly down one corridor after another. When he runs out of gas, he tries to find his way back, only to stumble on a body leaking copious amounts of blood. It’s his mother and it’s all he can do to stay with her and try to stanch the bleeding.

In short order, Bel vanishes, Peter’s grabbed by Rita, who claims to be a friend of Mom and one of her co-workers. She rushes him out of the museum and into a strange car that follows the ambulance transporting Mom. Peter’s paranoia starts ramping up as the convoy heads away from the two closest hospitals. It spikes even more as he overhears snippets of code-like conversations and senses that something highly suspicious. Little does he know how right he is. He manages to escape, but with Bel missing, where can he go?

What follows is like going in and out of a series of Alice in Wonderland rabbit holes. Every time Peter thinks he has something figured out, reality, or what passes for it, pulls another rug out from him. He’s unsure who to trust, how much of what he’s learned about mathematics can be counted on, he’s unsure who’s real or telling the truth, and as pieces fall into place, he finds himself on ever more fragile ground. Many details are revealed in flashback chapters going back anywhere from five days to seven years prior to the current story line. By the end, Peter, Bel and the reader are all still trying to sort things out. That’s not to say the ending is bad or incomplete, just nicely twisted. If you like industrial strength creepy, this book is for you.

To enter the drawing for a print copy
of This Story Is A Lie, just leave a
comment below. The winning name will
be drawn on Friday night, March 1st.
This drawing is open to the US and Canada.