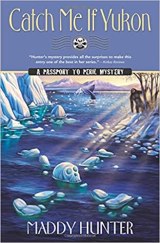 
Tour guide Emily Andrew-Ciceli might as well be herding cats when she leads a group of senior citizens from Iowa on a cruise along the Alaskan coast. The ladies hiss and spit, while the men growl and wander like tomcats. All are somewhat lax about keeping to a schedule. Then one turns up dead when she goes off on her own after a spat with one of the group and events become more serious. At first her death seems a tragic accident, but then there’s talk of murder.

Meanwhile, the group watches a glacier calf, goes whale watching and ziplining, but it is the photo of sasquatch while shooting photos out a bus window that gets everyone in an uproar. As media people follow them around after the picture is posted online, it’s hard for either Emily or the police to catch a killer.

The murder mystery isn’t really the point of this story. It’s a group of sometimes charming, sometimes aggravating seniors who drive the narrative. Amusing dialogue and characterizations, along with the well-depicted scenery of Alaska make the read terrific fun.