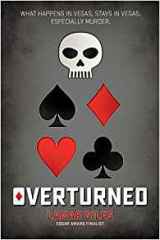 I am always seeking books that will immediately intrigue ‘my’ students. Many times, I’ve been sucked into a suspense-filled, action-packed, heart-pumping mystery…surrounding a subject they could not care less about. Aptly, of course, young adults are not the intended audience—I am.

Mr. Giles seems pleased to provide. And now, I may be the only person looking forward to school starting. I cannot wait to share Overturned.

The setting: the very casino where 16-year-old Nikki Tate works…as well as resides, stimulates the reader’s senses. At a blush, that life-style—for a high-school student—sounds kinda fabulous. And it was. Once.

Without her dad around to run things, the responsibility falls straight through her mother’s trembling fingers into Nikki’s own hands. She can handle it. Has to. Knowing, with her whole heart, that her father is not capable of murder doesn’t keep him off death row. Someone has to support the family—not just the three of them; the trusted and treasured employees of Cosmos matter, too.

Otherwise, she would never consider running her own after-hours, under-the-table card games. Which were not really a big deal. There’s only one human better at poker than Nikki and he’s not here right now. Gavin may still be in his teens, but his bulk makes him the perfect bouncer. Maybe he has a few butterflies when her invitations are extended to some shady characters, but Nikki knows she’s got this.

Until something even odder than the initial arrest and murder charge. New evidence, and an attorney more than pleased to represent Mr. Tate, appears. Conviction overturned and Mr. Tate is head of his casino once again.

Nikki’s delight with his return was fleeting. She once believed he was always there when she needed him. Now, his presence is so far past smothering, she seethes when they share the same space. Determined to make up for the lost time, and hoping to find the sweet, happy Babygirl he remembers; her dad dives deeper into her life.

Although Nikki doesn’t see it at first, Mr. Tate is not as angry as he is horrified and frightened by what he finds. As dad works diligently to get his daughter out of the quick-sand she doesn’t know she’s standing in, Nikki consistently (albeit unintentionally) blocks his way with a combination of teen-age infatuation and obligatory rebellion.

Overturned by Mr. Giles is absolutely every single thing I wish for when I want to wow ‘my’ students with a Book Talk.

I don’t know if Ms. Durkin and Ms. Cooke colluded to create a tiny tome that would call to all; from the self-dubbed non-reader to the basic bookworm, but that’s exactly what this groovy graphic-novel does.

Filled with fascinating facts, in the same way a teeny car contains a multitude of clowns, this was a particularly pleasing read for me. An at-a-glance timeline from 5,000 BC through 30 BC took up only a tiny portion of a page, but was packed with information. I had no idea that Egypt was divided and reunited so many times! Nor could I have fathomed the complicated process of turning papyrus into paper.

The “novel” is in the narration. The Histronauts, a quirky crew, complete with a cat, needed an indoor activity on a rainy day. Their museum visit morphs into an adventurous Egyptian exploration. As the kids take in the sights and ask amazing questions, I am completely captivated, learning about ancient Egyptians and their way of life. And if all of that isn’t enough, there are even activities through-out. From making jewelry to flatbread or simply solving puzzles, these were engaging additions.

I believe that reluctant readers will enjoy this because of the tantalizing trivia and the graphic-novel-format seems to be more appealing for shorter attention spans. I think avid readers will be reeling from the intriguing information. I was totally into it. And truly, who knew there more than 2,000 ancient Egyptian gods? Or that music was such an imperative part of their lives?

The Histronauts also embark on a Roman adventure and I am already looking forward to joining them.