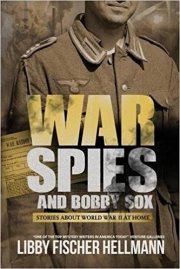 As World War II rages across Europe and the Pacific, its impact ripples through communities in the heartland of America. A farm girl is locked in a dangerous love triangle with two Germans soldiers held in an Illinois POW camp … Another German, a war refugee, is forced to risk her life spying on the developing Manhattan Project in Chicago … And espionage surrounds the disappearance of an actress from the thriving Jewish community of Chicago’s Lawndale. In this trio of tales, acclaimed thriller author Libby Fischer Hellmann beautifully depicts the tumultuous effect of war on the home front and illustrates how the action, terror, and tragedy of World War II was not confined to the front lines.

Libby Fischer Hellmann is one of the few authors who can surprise me nearly every time I pick up one of her books. Here, the surprise comes in her clear understanding of the World War II homefront, almost as though she had lived it herself.

Three tales provide a glimpse of how people, especially women, coped with the hardships, opportunities and moral pitfalls here at home while the main attention was on events overseas. Lena, a young Jewish girl, is sent to America before our involvement and makes her way in the world supported by her aunt Ursula and uncle Reinhard eventually getting a secretarial position in a university physics department. That, in itself, seems innocuous but this is the time when scientists are in the early stages of developing nuclear fission and Lena finds herself in a world of trouble.

Mary-Catherine lives in rural Illinois and helps her mother and siblings keep the farm running. When ten German POW soldiers are assigned to work the harvest, Mary-Catherine can’t help being interested by one in particular, a man who gives her the tiniest of smiles. To her, Reinhard is intriguing; to Reinhard, she is an “Irish mongrel” and, in that moment of meeting, a scheme is born that will change Mary-Catherine’s life while another POW will find a new direction.

Life as a Jewish gangster calls to teenaged Jacob Forman but he doesn’t bargain for what happens to a beautiful actress he admires from afar as she starts walking out with the charming gangster, Skull. When Skull invites Jake and his friend, Barney, to work for him as runners, they think they’ve hit the jackpot but can’t help noticing the sad distance that has grown between Skull and Miriam. Not long after, murder and a local Nazi open Jake’s eyes to a world much grimmer than he ever thought.

Once again, Ms. Hellmann has knocked it out of the park and, if you haven’t tried her mysteries and other work yet, this is a good place to start 😉