A call from a ghost hunter changes Deputy Tempe Crabtree’s vacation plans. Instead of going to the coast, she and her husband are headed to Tehachapi to investigate a haunted house and are confronted by voices on the wind, a murder, and someone out to get them.

Marilyn Meredith has been writing the Tempe Crabtree series for a long time and this one is every bit as good as those that preceded it and just as fresh. Tempe herself is an appealing police officer but the Native American elements add a special touch, not to mention Tempe’s ability to communicate with ghosts. Not only do we get an entertaining police procedural, we also actually have the chance to learn something about tribal life and customs in today’s world.

This time, a haunted house adds to the allure and spirits play an integral part in the search for a murderer as well as the truth about what happened to a woman who walked out of an earthquake-damaged prison into oblivion. Tempe and her husband, Hutch, intend to help the local police without stepping on toes but soon become potential victims themselves; perhaps the biggest puzzle is figuring out why a spirit is in the house and what it really wants.

Spiritual beliefs often play a part in Tempe’s investigations but they’re particularly important in Spirit Wind and blending them with modern police work, always tempered with the culture of the surrounding area and people, makes for an especially intriguing case and, once again, I was drawn in to a story that’s compelling in many ways. The next Tempe Crabtree mystery can’t come soon enough for me 😉


To enter the drawing for a very gently
used print copy of Spirit Wind,
leave a comment below. The winning
name will be drawn on Friday evening,
December 20th. Open to residents
of the US and Canada. 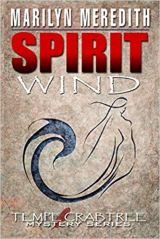 Tempe Crabtree’s eighteenth adventure is a winner. She’s back, in all her righteous stubbornness, determined, as always, to not only solve the crime in front of her, but to protect the innocent as well. This time she’s forced to also deal with the persistent resistance of her husband, Pastor Harry Hutchinson, who expected the pair would spend a couple of weeks relaxing at a coastal resort. But he also is experienced dealing with his wife’s often abrupt changes of direction.

Tempe, a deputy sheriff in Bear Creek, California, a small Sierra Mountain community, is enticed to visit Tehachapi and stay at the Stallion Springs resort. An acquaintance, one Lorna Collins, a ghost hunter, whom Hutch was less than enthusiastic to hear of again, was searching for the ghost of a lost female prison inmate.

Tempe, not unfamiliar with the spirit world, due in part to her Native American heritage, sympathized with the aims of her friend, not for a moment suspecting there were unholy forces abroad in Tehachapi. Almost from the moment they arrive the couple is embraced by a local detective. the ghost hunter and a strange spirit manifestation.

The story moves along apace, evokes the physical area and several intriguing and disparate characters. As usual, Tempe efficiently and realistically blends her well-developed policing skills with the sensitivity of her awareness of unseen forces around us.

This is a fine, highly satisfactory and enjoyable novel of murder, manipulation, the history of the area and it blends the known and the unknown with judicious balance and at a good pace until the final explosive resolution.

Reviewed by Carl Brookins, May 2019.
http://www.carlbrookins.com http://agora2.blogspot.com
The Case of the Purloined Painting, The Case of the Great Train Robbery, Reunion, Red Sky.

Chris Myers suffers from an overactive imagination. She spent her high school years writing torch songs for fantasy guys then moved onto writing thrillers and young adult. She has a real job but would love to write full time. Her books have won and placed in the finals and semifinals for several awards including Paul Gillette, Rocky Mountain Gold, and Amazon Breakthrough Novel. Chris lives in Colorado with her daughter, her better half, and BeBe, a rambunctious Bichon.

Sixteen-year-old Jolie Livingston’s closest and only friend Drew is this really hot dead guy, and it bites that the self-absorbed princesses at school cannot even see him. That’s right she can communicate with the dead. It’s the living she has trouble with. She and her mom inherited this awesome crib in Plymouth, MA. It’s quite a step-up from the homeless shelter in New Orleans, but there’s a catch. They can’t afford the past due mortgage, so Jolie’s working on that.

She starts a ghost hunting business called Ripsters. Somehow she’s managed to recruit Brittany, a glamour SAP smothered in pink, and a techie allergic to ghosts. Brit actually thinks he resembles the R&B singer Chris Brown. All that pink has clouded her vision. They both have special talents Jolie’s hoping will be useful to their venture. Right now, they’re working for a family in need of major therapy due to a dead guy with a hole in his head.

What a lot of fun this book is! With a mix of the paranormal, a bit of romance and a murder mystery that keeps our ghost hunters guessing almost till the end, nearly any reader can find something to like in Date with the Dead. Even the romance is appealing to those of us who’ve grown tired of the insta-love that’s so prevalent in young adult fiction because here it’s natural and, while there are plenty of roadblocks in the way, there’s no overblown angst. As a matter of fact, there’s a good deal of humor involved, especially with all the ghosts hanging about.

We’ve seen ghost hunter books before but this one is a cut above, full of charm and a good dollop of suspense, along with a little pathos involving less-than-stellar family situations. I really enjoyed spending time with Jolie and Drew and their pals and the whole idea of a town teeming with stray spirits works because of the setting. Where better than the heart of Pilgrim country and the American Revolution to find enough ghostly hangers-on to keep a budding ghost-hunting business rolling along for years to come? It doesn’t hurt, either, that these teens actually know what they’re doing most of the time although they certainly weren’t expecting to have to solve a missing person case that turns into something much worse.

I have to give Ms. Myers props for a couple of things. First, the editing of this book was very nicely done and I found no glaring errors beyond the occasional—and minor—typo. Second, her characterizations of these kids and the villains involved is lively and makes them feel real despite their tendencies to be involved in supernatural goings-on. I especially liked that each of the teens brings a different touch to the story and each has his or her own talents as well as weaknesses.

Make no mistake, this is not just a humorous piece of fluff. There is certainly a lot about it that’s amusing but we also get to see that even those kids who seem to have it all together have problems and, sometimes, they’re pretty serious. Jolie, in particular, is a girl with reasons to be very cynical about life in general but she’s still a most appealing teen who refuses to be beat down. I’m looking forward to reading about the next adventures of the Ripsters gang.

Sixteen-year-old Brittany Howland only knows one other girl, Jolie Livingston, who can communicate with the dead like herself. When Brittany takes Jolie’s haunt fishing to get him out of Jolie’s hair, he mysteriously disappears. Brittany isn’t sure how she’ll tell Jolie she lost her ghost. Jolie thinks her dead best friend Drew has finally crossed over, but Brittany knows better. Just before Drew went missing, he revealed why he hasn’t hitchhiked to the afterlife, a secret Brittany swore she’d take to the grave.

In a departure from the first book, Dead and Missing has two alternating narrators, Jolie and her colleague and friend, Brittany, and it works very well. I particularly liked getting to know Brittany a little better since she’s so very different from Jolie and yet they share an affinity for the spirit world. Still, you have to marvel at how a diminutive goth-dressing girl and a bouncy blonde athlete who always dresses in pink could get along, much less be friends.

These two girls also differ from the norm because Jolie is the sensible, rational one while Brit tends to be sarcastic and funny, sometimes rather W.A.S.P.-ish, and it’s that reversal of expected roles that makes them so appealing. Certainly they have their occasional differences of opinion but, at heart, they are sisters. So, could they really be sisters?

That’s just one of the puzzles that come to light when Brit and Jolie set out with Reese and Hayden to save Drew, Jolie’s BFF ghost who has been snatched by demons or some such things. They also want to find out what the underground Paranormal Guild is all about and how they can gain membership, all the while being warned from all sides about how dangerous this group is. There are definitely some dark things going on but even more surprising is what the Ripsters find out about their own family members’ involvement in the world of dark supernaturals. Add to that a “lovely” little ghost girl who’s been dead for about three centuries and who indulges in biting people and let the fun begin!

Ms. Myers has a third book coming in this series (trilogy?) titled Buried in New Orleans but I can’t find any other information about it. I’m looking forward to it and hope we won’t have to wait too long because I really do want to spend more time with these kids and see what they’ll be up to next.