Once again, big surprise, I find myself with
an overload of books read but not yet reviewed
so I think it’s time for a roundup or two…

If you’re ever in the mood for a nail-biting, gut-wrenching tale of police work, this is it. Detective Caitlin Hendrix comes very close to her own kind of obsession that plays like a counterpoint to the unsub’s sick and deadly obsession and, at times, it’s a little difficult to tell them apart. I don’t mean that literally—on the page, of course you know who is who—but the emotional turmoil that each feels has a sort of certain similarity and you can’t help wondering just how much the killer is affecting her, perhaps even twisting her mind, not to mention the agitation stemming from her own baggage. This unsub is pretty well terrifying and Ms. Gardiner had me flying through the pages.

Are you ready for some creepy vibes of the horror variety? From the opening scene of a deer dying on the road, I had a sense of what the title might refer to in a vague sort of way but I wasn’t prepared for how much I would like these characters, especially Joel and a new friend, Ash, a tomboy with an inner strength and a no-nonsense attitude. A high school superjock, Joel is typically obnoxious and a bit of a bully towards his kid brother but his life changes in an instant. He’s naturally full of anger and resentment but a kernel of compassion is there. All he can really hope for is to find acceptance for his new circumstances and, just maybe, a little happiness.

Too bad there’s something evil beginning to stir, maybe the end of the world… 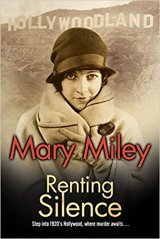 Jessie Beckett isn’t really a private investigator but she seems to have a knack for it so, when Mary Pickford asks her to look into a starlet’s death, she agrees, having no idea where her search for the truth will take her. Vaudeville’s colorful past, blackmail, an impending death sentence…all come into play but will these varying pieces lead Jessie to Lila Walker’s real murderer before Ruby Glynn hangs?

The mystery here is topnotch but it’s Ms. Miley‘s evocation of Hollywood in its early days that’s really the star of the show, pun intended. Mary Pickford, Douglas Fairbanks, Myrna Loy, Zeppo Marx,  even Rin Tin Tin fill the pages with so much history and fun it’s easy to become mesmerized. I thoroughly enjoyed this episode in Jessie’s life and will be staring the next book, Murder in Disguise, as soon as I can.

A town that’s down on its luck, economically speaking, is ripe for drug trade and mob activity along with a rise in petty crime and that’s what’s happened to Penns River, leading to corruption on multiple fronts and a police department that’s sorely tested. The “Resurrection Mall” of the book’s title actually is a shopping mall, one that’s being refurbished by a minister trying to help the community or so he says.

Doc Dougherty, the quintessential cop we all want on our side in a crunch, still goes home for Sunday dinner because that’s the kind of guy he is, rooted in family and the truly important things in life. Police work in Penns River is generally not exactly unusual but this time it most certainly is, beginning with the mass murders of five top level members of the drug trade.

Resurrection Mall is a little more dismal than I usually like but Mr. King‘s elegant writing, his plot development and his characters (who are refreshingly normal) all kept me going because I became invested in this Rust Belt community and in Doc. There are two earlier books and I think I’m going to have to check them out.

Aeva is a most unusual girl, even in her world that’s so different from our own, and is currently passing as the missing Queen Violet. Aeva is also right in the midst of the fight against a man who is obsessed with power, no matter what he has to do to obtain it and Aeva’s people look to her intelligence and strength to protect and lead them in this time of crisis. To do that, this remarkable young woman has become the strong, self-reliant heroine she was destined to be.

Crimson Earth is the sequel to Violet Storm which I read and enjoyed more than three years ago (https://cncbooksblog.wordpress.com/2014/09/24/book-review-violet-storm-by-anna-soliveres/). I didn’t feel quite the same connection to this second installment but I blame myself for not re-reading the first book before getting into this one and I really do recommend reading them in order to get the full effect of a really well-conceived dystopian tale.

Since the night her mother was murdered, sixteen-year-old Rory Gray has known one truth: There are no good Seeders.

In post-apocalyptic Australia, the scientists known as Seeders have built a Citadel surrounded by food-producing regions and populated with refugees from the wars and famine. To maintain their control, the Seeders poisoned the land and outlawed the saving of seeds.

It’s been six years since Rory graced the Seeders’ circus stage as the Wind Dancer and still the scars on her body haven’t healed. Even worse are the scars on her heart, left by a Seeder boy who promised to protect her.

Now the Seeders are withholding supplies from Rory’s region for perceived disobedience. Utilising the Wanderer knowledge she received from her mother, Rory must journey to the Citadel through uninhabitable terrain to plead for mercy.

However, the Citadel isn’t as Rory remembered. The chief plant geneticist is dying and rumours fly that the store of viable seed is dwindling. The Seeders are desperate to find a seed bank they believe Rory can locate, and they will stop at nothing to get it.

To defy the Seeders means death. But Rory has been close to death before–this time she’s learned the value of poison.

In the first few pages of Poison, I knew I was in for a treat when I discovered that Ms. Chan has added elements to what could have been a just-like-all-the-rest dystopian story, elements that lift it above the pack. The Reapers are certainly intriguing but the blood furies really caught my attention. The author doesn’t shoot her wad, so to speak, in those first pages, though; surprises are to be found from one scene to the next. (Glider suits? How cool!)

Ms. Chan is equally adept with plot and character development. The tale of a world that comes into being following devastating famine is unusual with her special touches, leading to pathos as well as resistance against the controlling Seeders, and the near-constant twists and turns left me breathless at times. Rory’s own evolution into a young woman who overcomes her fears and rises above what seems to be neverending adversity is compelling and it’s impossible to be sure who is friend, who is foe.

Australia makes a wonderful setting especially with its native fauna that becomes just a little odder as a result of genetic manipulation. This country’s natural and spectacular beauty lends itself well to a story focused on the environment and, for me, heightened the impact of the disaster that could very well arise from genetic manipulation of our agriculture. Perhaps we should take heed.

Lan Chan is a writer, gardener and professional procrastinator based in Melbourne, Australia. She is still waiting for her super powers to manifest but until then she writes young adult novels featuring strong female protagonists, minority characters and has a particular interest in dystopias and urban fantasy. Lan’s debut novel POISON, the first in her WIND DANCER series was released in September 2015. 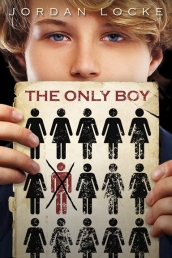 After a global epidemic wipes out all the men, a girl must decide whether to help the only boy…or betray him.

Mary is stuck in Section One, living with three hundred women in a crumbling hospital. She wonders what life was like before the Cleansing wiped out all the men. But the rules-the Matriarch’s senseless rules-prevent her from exploring the vacant city to find out.

Taylor’s got a dangerous secret: he’s a boy. His compound’s been destroyed, and he’s been relocated to Section One. Living under the Matriarch means giving up possessions, eating canned food and avoiding all physical contact. Baggy clothes hide his flat chest and skinny legs, but if anyone discovers what lies beneath, he’ll be exiled. Maybe even executed.

Taylor should go. The Matriarch is watching his every move. But running means leaving Mary-and braving the land beyond the compound’s boundaries.

There have been earlier stories about one gender or the other being nearly wiped out but a good author can always find ways to make a concept fresh and Jordan Locke has succeeded in doing just that. Here, we have people who’ve never known the touch of another human because the killer disease can still be passed from one to another. Imagine that, a world in which touching is strictly forbidden. At first, one might think such a lack can be acceptable considering the alternative but it soon becomes clear that not everyone can handle it.

Certain players in The Only Boy really come to life, especially Mary and Taylor but also Wren, Jade, the Matriarch, even the miserable Katherine who has reasons for being such a bully. Mary and Taylor each tell the story from their own points of view and both are truly sympathetic characters as they begin to learn each other’s secrets and a few truths that have been hidden for years.

Worldbuilding is generally nicely done but there are some hiccups. We know that it has been at least decades since all the men died so how is it Section One can still be finding and eating apparently unlimited supplies of canned goods within their relatively small territory and why aren’t the cans swollen and full of botulism? Taking it a step further, with their scientific studies over time, why do they still rely on canned goods instead of learning ways to live off the land or, for that matter, create synthetic foods for themselves? I also wonder how there can be trees or agriculture if the disease killed off plants like flowers.

And just how long has it been? In one place decades are mentioned, in another there is a reference to centuries of decay but surely that’s not right; news is still being broadcast on TV and Pepsi commercials play. Why have so many animals and insects gone extinct but not all unless it has indeed been centuries?

There will be several more installments in the series so I’ll assume many of these questions will be answered and that we’ll also find out about Sections Two through Six  and possibly more. I do want to know more about the characters we’ve met here and I’ll be looking for the next book.