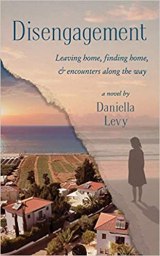 In 2005 Israel withdrew 8,000 residents from the Gaza strip and five settlements in northern Samaria. Neve Adra is a fictional settlement but this novel is based on the event called “the disengagement.” The settlement has twenty or so stone houses, some caravans, and a synagogue, surrounded by sand. Greenhouses are built, and crops are raised. After the 1967 Six Day War, Israeli government made an effort to establish a Jewish presence throughout Gaza. One of the masterminds was General Ariel Sharon.

Elected prime minister in 2001, Sharon promised a tough approach to protect the settlements.  He visited the local rabbi’s family and promised to defend their home. In 2003 he announced a plan for withdrawal from Palestinian territories, which caused uproar on the political right.

The chapters focus on different characters at different times. Narrators include a left-wing newspaper columnist; a Russian-born protest organizer; Rabbi Schlomo, who lost his leg in the Six Day War, and his family. His wife was reluctant to move to the settlement—in the early days there was no electricity, running water, schools, or transportation. There is tension between the Arab workers and the Jewish settlers. One of the young settlers, Aharon, is killed by a mortar shell to the greenhouse.

This is more than the story of a settlement in the Gaza. It’s about what it means to be disengaged from love, friends, neighbors, family and from deeply held beliefs.  It shows how listening to one another and learning from unexpected encounters can help to become connected.

The author lives in Israel and blogs about life as a religious Jew in Israel. Her family immigrated to Israel when she was a child.