Sophie will steal your heart and will, forevermore, own a tiny piece of it. You’ll be fine with that. Think Annie; although Miss Sophie is as far from the spunky, spiral-curled red-head as a lonely, little phantom Russian girl, could be.

Under the perpetually gray skies of London, tucked into her tiny room with Delphine and Marianne, wrapped in her raggedy sweater, life was just fine for Sophie. With the Class Trip quickly approaching, the inevitability of being ripped from her “home” and ushered to her guardian’s, banished to silently haunt the shadows of the empty rooms, had Sophie slipping back to the dreams that both saved, and shattered her.

With no memory of her mother, only vague, distant memories of her cherished father, surrounded by snow, rushing her along to something….or maybe away from someone…..that part wouldn’t come; Sophie subsisted on dreams, fantasies woven around this tiny fragment of recollection. Possessing and nurturing such a vivid imagination, Sophie had little trouble accepting the bizarre Class Trip turn of events that would take her, along with both roommates, to Russia!

Admittedly less than eager, Delphine and Marianne weren’t so accepting. Quickly noticing a strange, yet familiar, woman watching them, the girls began to feel a bit nervous, particularly as their class mates seemed to be scattering away in tight cheerful groups. Those butterflies paled in comparison to later being unceremoniously, and quite literally, dumped into a snow-bank, with the pitch blackness of the night pressing down.

From here to a grand, albeit derelict, palace with a beautiful, intense and often confused princess, was perfectly acceptable to Sophie, Delphine could be placated by the grandeur of the still sparkling chandeliers and vastness of the rooms, while dependable Marianne felt fine so long as her pals felt fine.

The sense of foreboding, howling wolves, deliberate solitude and mounting, unanswered questions was soon to come. Even with hackles justly raised, the trio could never have prepared themselves for an adventure with jewel thieves, stolen identities, unfathomable choices made in seconds, many years ago, a family living underground to care for a mythical pack of wolves, or the consequences and rewards ingeniously, resourcefully hidden.

Ms. Constable has crafted an enchanting tale, filled with complicated, compassionate characters, both human and animal, all looking to solve the same mystery, for vastly different reasons. In spite of the icy princess, blustery snow and biting cold, this book will melt your heart.

Two years ago not only had she and her best friend Alex found a real-life Sleeping Beauty in the middle of Los Angeles, they also discovered that they were powerful in their own right. They’ve managed to keep both their fae powers and their friend Lilia’s identity as a medieval princess a secret and live a normal life. Now their normalcy is threatened by the return of their former advisor at the Gem and Mineral Museum—and Becca’s least favorite person, Nicholas Hunt.

…and she’s about to find out that more than one fairy tale is true.

Nicholas has been obsessed with proving Lilia’s identity and the existence of magic. While working on an archeology dig he discovered an ancient fae artifact—a mirror that is imbued with a powerful protection spell that twists his obsession, and his body, until he is more beast than man. In order to protect her friends, Becca is forced to help him, and she is surprised to find that in spite of his outward appearance, Nicholas is no longer the beast she remembers. Will she let herself be the beauty that breaks the curse, or will she let her prejudice against him stop her from discovering true love?

Until I was offered an opportunity to participate in this blog tour, I had never heard of this series. I”m very happy that omission in my reading life has now been corrected. I love the concept of normal everyday girls not only finding themselves with fae powers but also smackdab in the middle of some well-known fairytales; this time, it’s Beauty and the Beast. In this retelling, the heroine of the piece, Becca, is surprised to discover what has happened to Nicholas but she isn’t surprised by her revulsion at his appearance because she actually doesn’t have that reaction. That’s the special touch Jessica Grey has brought to this particular fairytale that I really loved—Becca already detests Nicholas so his new appearance doesn’t fill her with shock. Of course, it also helps that her fae nature and her experience with Sleeping Beauty has preconditioned her to accept such things.

So, much against Nicholas’ will, Becca sets out to right the wrong and get the current magic run amok under control. More than anything else, she wants to protect Lilia who’s living under an assumed identity. Nicholas has been driven to gather evidence to expose Lilia along with Becca and Alex and is nursing a serious resentment against the girls and their fae abilities.  Can Becca stop him from revealing everything and can she and Nicholas work together to end his enchantment?

I grew very fond of the three girls who seem to have a mature outlook on their lives as fae but who will do whatever is needed to protect each other’s secrets while maintaining normal human lives around those who don’t know the truth about them. Becca is especially appealing as we learn that she is far from perfect and yet becomes willing to admit that, perhaps, she doesn’t always have all the answers and that surprises are in store for her where NIcholas is concerned.

The crux of the original fairytale is that a man who has always used his looks and position to get what he wants is suddenly turned into a horrible sight that no one can bear to look at and, yet, there is love and redemption waiting for him. Ms. Grey has neatly turned this into a modern re-telling with the same values and it works beautifully. Is there romance in this modern-day version? Of course, but my thanks go out to Ms. Grey for making it a natural progression and not a sudden “oh, my, all my opinions about you have been so wrong’ in the first five minutes. Watching Nicholas grow into a changed man and watching Becca begin to care what happens to him are well worth the reading journey.

As I mentioned before, this is the first book in the trilogy I have read. While I sometimes wished I knew more about what went on in the first book, Awake, I also felt that Atone is eminently readable as a standalone. Still, I’m going to have to go get Awake to tide me over till the third book comes out. I also have a small hope that fans of the Fairytale Trilogy will convince the author to write more than three of these delightful tales. 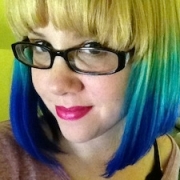 Jessica Grey is an author, fairytale believer, baseball lover, and recovering Star Wars fangirl. A life-long Californian, she now lives in Montana with her husband and two children where she spends her time writing, perfecting the fine art of toddler-wrangling, and drinking way too much caffeine.

To enter the drawing to win an ebook copy of Atone
by Jessica Grey, leave a comment below. The winning
name will be drawn on the evening of Thursday,
September 19th and the prize will be sent out during
the week of October 7th.