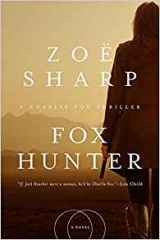 
From the publisher:  Zoë Sharp’s tough-as-nails Charlie Fox returns this summer in the latest thriller in this energetic series:  Fox Hunter, which finds the indomitable ex-special forces soldier on a mission into the Iraqi countryside to track down a missing comrade-in-arms.  Special forces soldier-turned-bodyguard Charlotte “Charlie” Fox can never forget the men who put a brutal end to her military career, but a long time ago, she vowed she would not go looking for them.  Now she doesn’t have a choice.  Her boss, Sean Meyer, is missing in Iraq, where one of those men was working as a private security contractor.  When the man’s butchered body is discovered, Charlie fears that Sean may be pursuing a twisted vendetta on her behalf.  Charlie’s “close protection” agency in New York needs this dealt with – – fast and quiet – – before everything they’ve worked for goes to ruins.  They send Charlie to the Middle East with very specific instructions: Find Sean Meyer and stop him – – by whatever means necessary.  At one time Charlie thought she knew Sean better than she knew herself, but it seems he’s turned into a violent stranger.  He was always ruthless, but is he capable of such savage acts of slaughter?  As the trail grows ever bloodier, Charlie realizes that she is not the only one after Sean and, unless she can get to him first, the hunter may soon become the hunted.

In its early pages, this newest Charlie Fox novel describes a series of suspense-filled, exciting chase scenes, the initial outcome not a good one.  We are allowed to see occasional displays of Charlie’s vulnerability, especially apparent where Sean is concerned.

The only blurb on the front cover, from Lee Child, captures her completely:  “If Jack Reacher were a woman, he’d be Charlie Fox.”  What more can – or needs to – be said?

Charlie Henry and his sidekick, Gordon, are ex-Special Forces soldiers, now partners in the FOB Pawnshop in Albuquerque, NM, but civilian life hardly is a retiring one for either of them. Trouble seems to find them on a regular basis in this second of a series of action-packed adventure.  Mysteries and mischief seem to just walk into their store.  In this latest story, it begins when a young woman pawns a valuable Navajo necklace.

Soon three gunmen enter the pawnshop in an attempt to retrieve the bracelet. And a shootout results in one of them dead and another wounded, with Charlie and Gordon none the less for wear, but off and running to find out what prompted the invasion.  This leads to a wild goose chase all around the New Mexico city with violence galore until they learn what lies behind they mystery of the bracelet and the death of its creator.

While the plot follows a traditional pattern of a police procedural, and there are plenty of cops involved, with enormous assistance from Charlie and Gordon, the novel really centers on the swashbuckling duo and their antics, rather than detecting clues to solve a crime or murder.  And there is plenty of this type of action to satisfy the most bloodthirsty reader.

Michael Cassidy is a detective in New York City’s midtown precinct during the 1950’s in the era of McCarthyism.  He is a dramatic character drawn in the classic mold of a tough hombre.  His godfather is the mafia stalwart Frank Costello, his father an immigrant who started with less than nothing and rose to become a well-known Broadway producer.  Cassidy picks up a murder case, the victim actually a dancer in the show his father is producing and now in rehearsal.

One murder leads to three others, and Michael becomes involved in a web of conspiracies involving the FBI and the CIA, and with Roy Cohn and J. Edgar Hoover, no less.  Cassidy is taken off the murder case by higher-ups, but true to fashion, he persists.  Faced with complications of monumental proportions his doggedness continues.

This novel, a debut, is excellent.  The background of New York City just after World War II is superb, and the atmosphere of the Red Scare years and McCarthyism is very real, especially for those who lived through the period.  The book has much to recommend it, and indeed is highly recommended.