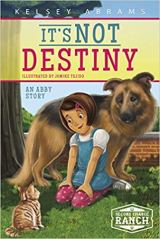 
Abby Ramirez does not like change, she craves consistency. So, she’s been struggling in her fifth-grade class. For the first time since first grade, she is not accompanied by her service dog. Amigo is transitioning from a working canine to a playful pet as Abby searches for his replacement.

She is the little girl that knows a whole lot about dogs. Being in charge of them at Second Chance Ranch comes naturally. Not just raising and training, but she is also the best match-maker any canine and human could hope to encounter.

When a disappointed owner brings in a gorgeous German shepherd that proved to be a poor guard-dog, it does not take Abby long to understand the importance of placing Destiny with the proper human. This pup has been through tough times, she will need an owner who understands that.

It isn’t often that a story centers around an autistic character, especially when autism spectrum disorder does not particularly pertain to the plot. And Abby absolutely does not allow it to define her. Rather, it is a part of who she is and we see that, not just while she is with Amigo, but even more clearly when she reaches for him, even in his absence.

I am amazed by how many layers this tiny tome contained, while managing to be a quick, compelling read. I even learned the history of the Iditarod.