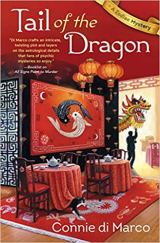 That said, when the body of a prominent, though not well-liked attorney is found with his throat cut, with so many wronged people to choose from, the motive is hard to find. Enter astrologer Julia Bonatti, drawn into the investigation by chance when she agrees to fill-in on her old job during the boss’s assistant’s vacation. She’ll try to discover the murderer at her boss’s instigation by checking her astrology charts, but contradictory information awaits her there.

Slowly, Julia discovers several death threats have been sent to various people at the firm, including the murdered man. Even finding the connection between the three is tough, and as Julia, with the cooperation of an intriguing PI her boss hires, comes closer to getting to the motive, another attorney in the firm is murdered. Worse, Julia’’s astrology charts indicate she may be next.

The motive may come as a surprise. So does the perpetrator. A surprise to Julia, too, which is a nice touch with so many possible killers out there. Shudders. Not a place I’d want to work.

If I have a complaint, it’s that I’m not interested in precise street names and addresses. I don’t even know if they’re real for the city of San Francisco, so to me they were something to skip over. Other reader’s opinions will, of course, vary. The book is well organized, well paced, and well written.

To enter the drawing for a very
gently used print advance reading copy of
Tail of the Dragon by Connie di Marco,
leave a comment below. The winning name
will be drawn on Sunday evening,
September 16th. This drawing is open
to residents of the US & Canada.

Rob Ramer was the perfect husband until he committed the ultimate family faux pas — he shot his sister-in-law to death. Believing himself under attack by an intruder in his home, he fired back. But when evidence is discovered that Rob’s wife, Brooke, was plotting his murder, Brooke is charged with conspiracy in her sister’s death. Geneva, a third sister, is desperate for answers and seeks the help of her friend, San Francisco astrologer Julia Bonatti. Geneva’s lost one sister and now it seems she’ll lose the other. Was this a murder plot or just a terrible accident? Julia vows to find the answer in the stars.

Generally speaking, I like cozies but I find some of them overly simplistic and too often one is just like the next—different occupation but the same romance, the same reasons for sleuthing when the police haven’t even had a chance to do their jobs. Still, they can be a nice change from the grittier, perhaps more violent crime fiction I usually choose.

All Signs Point to Murder is a good blend of types and I appreciate that. The initial crime is interesting because of the circumstances and the people involved and, while I’m not a true believer in astrology, I understand why it appeals to so many and why Geneva turns to Julia for help. Perhaps someone who reads the stars, and does it well, could see possibilities others might not. As it turns out, Julia does begin to discover things that lead to more questions and, eventually, to answers.

While I enjoyed this book, I do think the author missed a golden opportunity. Readers like me who don’t understand much about astrology are potential sponges for learning but there’s very little explanation here, mostly just statements. Because of that, I skimmed a fair amount and gave my attention to solving the puzzle which, by the way, was not all that easy; I figured out the simple who early on but not the broader who or the why so there was plenty for me to think about.

Besides crafting an intriguing cozy with an edge, Ms. di Marco also has a knack for characters and I found I especially liked Cheryl and Gale as well as Julia and won’t mind spending more time with them in the future.

An Excerpt from All Signs Point to Murder

The building on Guerrero was a once proud Victorian with bow front windows. It had since been broken up into six small units and fallen into disrepair. I drove around the block several times before I managed to find a parking spot a few doors down. The shops on the main street were long closed and the streets deserted. I shivered and let the car heater run another minute to warm up before I left the comfort of my little metal box. There was something about this chore that made my stomach go into knots. Rummaging through a dead woman’s possessions was bad enough, but what if I found something that implicated Moira in a crime? Should I remove it and risk the police finding out?

I climbed out of the car, careful to lock it and approached the long stairway leading to the front door. The wind had died down and now fog danced around the streetlights. It was eerily quiet. No lights shone from any of the windows. I hoped all the residents were safely tucked up in their beds by now. I climbed the cracked granite stairs to the entrance. The weathered door stood ajar, listing slightly on its hinges. I grasped the handle and twisted it, but the lock mechanism was out of commission. Inside, a bare overhead light bulb hung from a chain. It cast a meager glow down the long corridor, cannibalized from a once grand entryway. The hallway smelled of dirty cat litter, moldy vegetables and cigarette smoke. I followed the corridor to the end, and stopped at the last door on the right.

I slipped the key into the lock. It offered no resistance. The door opened immediately. Had it not been locked? I caught a slight scuffling sound and cringed. I hoped no furry long-tailed creatures were waiting inside for me. I reached around the doorway and felt along the wall. My fingers hit the switch. A rusting chandelier with two bulbs missing illuminated the one large room that was both Moira’s living room and bedroom. I tested the key with the door open, locking and then unlocking it. Now I felt the resistance. The door had definitely been unlocked. I stepped inside and shut it behind me, making sure the lock was secure. Was it possible someone had been here before me and left without locking the door? Or had Moira simply been careless?

I had to make sure I was alone in the apartment. There were no hiding places in this sparsely furnished room. I checked under the bed just to be sure and opened the closet, terrified that someone or something might jump out at me. The closet was narrow, filled with a jumble of clothing, half on the floor. I walked into the kitchenette and spotted a doorway that led to the back stairs and the yard. I tested the handle on the door. Locked. I checked the space between the refrigerator and the wall, and then the shower stall in the bathroom. I was alone. I had been holding my breath and finally let it out in a great sigh.

I started with the drawers in the kitchen and checked the counter, looking for any notes with names or phone numbers. There was nothing. The kitchen was surprisingly clean, as if Moira had never used the room. Inside the refrigerator were a few condiments, a half-eaten unwrapped apple and a loaf of whole wheat bread. I quickly rummaged through the drawers and the freezer to make sure there were no bundles of cash disguised as frozen meat.

The main room housed a collection of hand-me-downs and broken furniture, ripped curtains and piles of clothing in various spots around the floor. Had she really lived like this? I heaved up the mattress, first on one side and then the other, making sure nothing was hidden between it and the box spring. Under the bed, I spotted only dust bunnies. I pulled open each of the bureau drawers, checked their contents and pulled them all the way out to make sure nothing was behind them. I opened a small drawer in the bedside stand. Amid a loose pile of clutter was a dark blue velvet box embossed with the letter “R” in cursive gold script. Could this be from Rochecault? I was fairly certain it was. Rochecault is an infamously expensive jeweler on Maiden Lane downtown. How could Moira have shopped there? Was this what Geneva had meant when she said her sister seemed to have a lot of money to spend?

I opened the box and gasped. An amazing bracelet heavy with blue stones in varying colors rested inside. The setting had the slightly matte industrial sheen of platinum. Moira couldn’t possibly have afforded this. Shoving the box into a side pocket of my purse, I decided I was definitely not leaving this for the police to find, and slid the drawer shut.

I scanned the room. Moira hadn’t been much of a housekeeper and it didn’t appear as if there were many hiding spots. I headed for the desk, a rickety affair with two drawers and a monitor on top. I clicked on the hard drive and waited a moment. The monitor came to life and asked for a password. It would take someone much more talented than I to unearth its secrets. Under a jumble of papers and unopened bills, my eye caught a small black notebook. This looked promising. Perhaps it was an address book that would give us all of Moira’s contacts. I dropped my purse on the floor and reached for the book. A searing pain shot through my skull. Blinded, I fell to the floor.

Connie di Marco is the author of the Zodiac Mysteries from Midnight Ink, featuring San Francisco astrologer, Julia Bonatti. The first in the series, The Madness of Mercury, was released in June 2016 and the second, All Signs Point to Murder, was released on August 8, 2017.

Catch Up With Connie di Marco:

To enter the drawing for an ebook
copy of All Signs Point to Murder,
leave a comment below. The winning
name will be drawn Saturday evening,
August 19th, and the book will be
sent out after the tour ends.