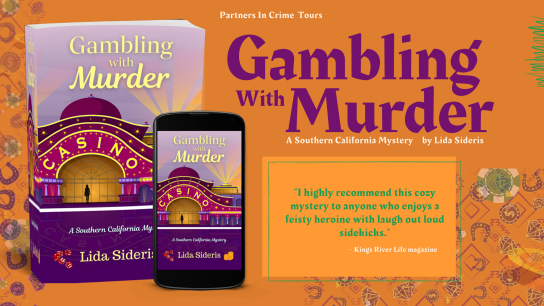 A late-night call is all it takes for rookie lawyer Corrie Locke to kiss her day job at the movie studio goodbye, and do what she does best: flex her sweet P.I. skills and go undercover to find a senior who’s missing from a posh retirement community. One small stumbling block: skirting past security to gain inside access to the exclusive Villa Sunset. Time to call in the heavy artillery. Besides former security guard turned legal assistant—now wannabe P.I. –Veera, Corrie relies on a secret weapon: her mother, a surprisingly eager addition to Corrie’s team. Armed with enough attitude and pepper spray to take down a band of Navy Seals, Mom impersonates a senior to infiltrate the Villa, Corrie and Veera in tow. Turns out the job’s not as easy as they’d thought. These seniors have tricks tucked up their sleeves and aren’t afraid of using them.

The action gets dicey as the missing senior case turns into attempted murder by a criminal mind who’s always one step ahead. Corrie’s hot on the trail, but finds more than she bargained for…especially when her mother becomes a target.

When I first started reading this book, something kept niggling at me, sounding familiar. After rummaging around a bit, I discovered that I wasn’t imagining things and had actually read and reviewed the first book in the series back in 2015. I had really enjoyed it so why haven’t I kept up with the series in the past few days years? The only excuse I can come up with is that I just lost track of it.

At any rate, here I am with book #5 and I’m so glad to be back in the fold with Corrie’s small posse of wannabe private eyes. Mom is a new addition because of her ability to con their way into the retirement village and she brings her own wacky determination and zeal to the task at hand. Along with Corrie and Veera, Corrie’s very noticeable assistant and best friend, this is a formidable trio who will dig up the truth and have a high old time doing it.
Throw in the shenanigans of a bunch of entitled retirees bent on making the most of their golden years and you have the recipe for a rollicking good time as well as a good puzzle to be solved. I loved the story here just as much as the highly entertaining characters and am only sorry I finished it so quickly. I guess I’ll have to feed my desire for more by catching up with the books I’ve missed—oh, woe us me, more fun books to read!
Reviewed by Lelia Taylor, March 2022.

An Excerpt from Gambling with Murder

Luck be a Lady

I maneuvered around shattered glass, splintered picture frames, and fragments of bubble wrap strewn along the cracked cement floor. Something crunched or crackled beneath my every step. Empty spaces joined hands to form a footpath meandering through the old warehouse. The beam of my flashlight circled around stacks of crates, blankets, old tires— “Ninja One, see anything yet?” Veera Bankhead’s voice sputtered through the walkie-talkie cinched onto my belt. Dressing up like ninjas had been Veera’s idea. To help us blend into the night. We wore matching black tunics over black slacks. The hood hid my long hair. A facemask rendered me incognito. Only the slit across my eyes kept me from tripping. Veera was posted in the parking lot outside to discourage unwelcome visitors. “Looks like a hoarder’s paradise.” I stepped over a pile of well-used sneakers. “Any idea of what we’re looking for?” she asked. “Oh, the usual hidden-in-a-warehouse items. A barrel labeled ‘TNT’. A nondescript briefcase filled with rolls of cash. Dorothy’s ruby slippers would be nice.” By day, Veera and I worked in the legal department of Ameripictures Film Studios. Tonight’s side gig was connected to our day job…by a nearly invisible thread. Props had gone missing from a high-budget movie currently in production. A police investigation was underway, but Veera suspected an inside job. She’d convinced studio security into letting us take a look. An anonymous tip led to a Los Angeles warehouse hidden beneath the 405- freeway. I stepped gingerly over dented soda cans to stay on the path. “We gotta find something,” Veera said. “Our reputation’s at stake.” She didn’t mean our reputation in the legal department. She meant our reputation as quasi-professional, unlicensed private investigators. I had my father to thank for showing me the P.I. ropes. Investigating suspicious deaths was what I did best, with help from Veera. It had earned us a level of respect from the studio security crew. That’s how we got the nosing around for missing props gig. “I still say that new intern is behind the thefts,” Veera said. “He’s been hangin’ out at the prop house every day.” “Isn’t he inventorying the props?” I asked. “So he says,” Veera replied. I had low hopes of finding anything tonight but I had to admit, this was the perfect location to hide stolen goods. A baby elephant could get lost in here. “Did you find out who owns this place?” I asked. “Working on it,” she replied. It didn’t hurt matters that Veera had handled parking lot security before becoming my legal assistant. She had connections far and wide in the Southern California security guard world. I pinned the beam of my light into a dark corner. “That’s strange.” Four large pieces of luggage lay side-by-side, atop a long folding table. Everything surrounding me was in stacks and piles. I quick-stepped closer. The luggage exteriors, aluminum handles, and zippers looked new. Why store unused luggage in a place with worn-out, broken-down stuff? “Oh-oh,” Veera said. “Hold on.” I grabbed a suitcase and slid it closer to me. I shone my light on a combination lock. Next to it sat a small keyhole. Pulling out a paperclip from my pants pocket, I shoved it into the keyhole and jiggled it around. “Two unmarked vehicles drove up,” Veera whispered. We’d parked my car behind the warehouse. I’d left Veera hiding behind a bottle brush shrub near the entry. I popped open the lid of the suitcase. Folded bedsheets lay on top. Easing them aside, I gaped at the blood-red cape with a stylized golden “S” on the back. “It’s Superman.” “The cars parked next to each other,” Veera said. To the side of the cape lay a pillowcase. I ran my fingers over something odd-shaped and bulky inside. I unwrapped it to find a one-of-a-kind, golden gun. “No way.” A cigarette case formed the handle. The trigger was a cufflink and a fountain pen served as the barrel. It was a prop gun from a James Bond film. “Two muscular guys came out of a van,” Veera said. “There’s a third-person taking his sweet time exiting a Prius. Looks to be someone smaller, older by the way he moves. And he’s wearing a dress, which means he could be a female. Headed your way. If there’s a backdoor, I’d use it.” “Can’t. I hit the jackpot.” I spun around. Where to hide? # *** Excerpt from Gambling With Murder by Lida Sideris. Copyright 2022 by Lida Sideris. Reproduced with permission from Lida Sideris. All rights reserved.

Lida Sideris’ first stint after law school was a newbie lawyer’s dream: working as an entertainment attorney for a movie studio…kind of like her heroine, Corrie Locke, except without the homicides. Lida was one of two national winners of the Helen McCloy Mystery Writers of America Scholarship Award and a Silver Falchion Award Finalist. She lives in the northern tip of Southern California with her family, rescue dogs and a flock of uppity chickens.

Visit these other great hosts on this tour for more great reviews and giveaways!

This is a giveaway hosted by Partners in Crime Tours for
Lida Sideris. See the widget for entry terms and
conditions. Void where prohibited.

Get More Great Reads at Partners In Crime Tours