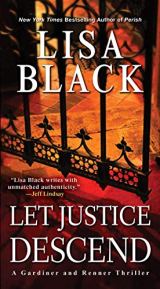 
Make no mistake, this is a political murder mystery, set in the present time with an important election looming. There will be those readers who will find slant or bias to one side or other. I found no such leanings. The author, being a talented, experienced writer, was careful to blacken and trip up political operatives of almost every stripe and level.

The story is set in Cleveland, Ohio, and concerns maneuvering and planning to build on a riverbank in the city already heavily contaminated by previous owners. A U.S. Senator, up for re-election in a short time is found dead in her yard. Police detectives Jack Renner and Tom Riley, joined by forensics specialist, Maggie Gardiner, start the case with the electrocuted body of Senator Diane Cragin.

We follow the investigators step by step, perhaps too detailed for some readers, but the detail nicely reveals the relationships between the police and other characters. The pace is relentless and soon other characters appear, some to die in more mysterious circumstances. Are they related to the Senator’s murder? Read the novel to find out.

Cleveland and its environs and even the weather are nicely woven into the narrative, a narrative that rises in tension and pace throughout the story, as the election nears. Anyone who has ever participated in a close election will appreciate the scenes of work and tension, played well against the crime investigation.

If a few sections of the narrative seem to descend too far into the minutiae of elections and crime solving, the detail is accurate, consistent and very well done. The final solutions to what have become multiple mysteries are clean, logical and satisfying in an excellent murderous slam at our political climate.