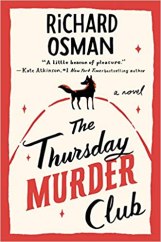 
This is Richard Osman’s first mystery novel and it’s getting some great reviews. He is well-known in Britain having been the host of the popular television quiz show “Pointless” for a number of years.

His foray into mystery writing has been well received and indeed the novel is up for a number of awards. I’m not surprised. I really enjoyed The Thursday Murder Club. Its setting is a retirement village in Kent called Coopers Chase and that’s where we meet Ron, Joyce, Ibrahim and Elizabeth, the members of the Thursday Murder Club.

Joyce is the newest member of the Club. She is Penny Gray’s replacement. Penny is in the nursing home, unable to communicate after a debilitating stroke. Penny was an Inspector with the Kent Police before retiring. She’d brought with her a number of unsolved case files, files the Thursday Murder Club has been working to solve.

A meeting has been called by the property owner Ian Ventham with regard to proposed changes to Coopers Chase. His plans involve expanding the community solely for the purpose of increasing his wealth. The residents are frustrated and annoyed at this development, but there appears to be little they can do.

The following morning the residents are shocked to learn that Ian Ventham has been murdered. Elizabeth, on the other hand, is excited that The Thursday Murder Club has a current crime to solve. She takes charge and with the help of the other Club members set about investigating the murder.

All the characters we meet in this charming mystery are well rounded, interesting and intelligent people. There is a good deal more to Elizabeth than meets the eye, as she and her retired friend, each with a skill to enhance the investigation, boldly involve themselves in the search to uncover the killer.

There’s much to explore and more to admire as they unravel this intriguing tale.

Check it out… you won’t regret it!!