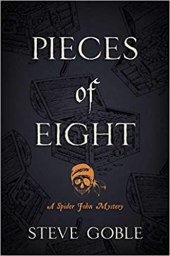 1723—Spider John is almost home, free of the horrors of the pirate life, free of the violence, free of the death. The wife and baby he left behind almost a decade ago are almost within reach.

But then a murder aboard Minuet uncovers a deeper conspiracy, and soon Spider and his friends—curmudgeonly Odin, swashbuckling young Hob and alluring Ruth Copper— find themselves in the midst of flintlock smoke and bloodshed.

The violence follows Spider ashore to Nantucket, where the loving reception he’d dreamed of turns out to be something utterly unexpected. Soon, Spider is running for his life and confronting cutthroats and thieves — while hiding from islanders who think he left a man dead on a widow’s front step.

The solution? Find the killer. The consequences? Those could change Spider John’s life forever.

Why am I waiting so eagerly? Pirates! I ask you now, what could be more fun than a mystery full of nefarious, scruffy, potty-mouthed ruffians brimming over with verbal invective and very bad behavior? Spider John has been trying for three books now to get out of the piracy business and has been failing miserably, sidetracked by dead bodies who, er, shouldn’t be dead, and here comes another one…or more. Will he succeed this time? Avast, Mateys!