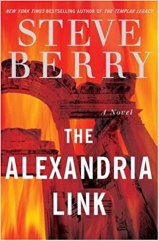 
Steve Berry is a celebrated writer of international thrillers and a New York Times bestselling author. He writes long and complicated novels, often with enough characters to fill a small assembly hall. So readers have to pay attention. This is not a criticism, just a comment that you shouldn’t pick up this novel looking for a quick beach read.

This novel concerns good folks and a lot of very bad guys in several of the major combatants of the Twenty-first Century, namely, the U.S., Britain, Palestine, Israel, and Austria. Within each of these nations operate nefarious criminals, secretive organizations, and talented individuals.

Cotton Malone, a former agent for the U.S. has retired to Copenhagen, Denmark, and become a bookseller. Malone has a secret—he is the keeper of a vital link to the location of the greatest, most complete library known to ancient man—the Alexandria Library. That collection of books and scrolls was created nearly two thousand years BCE, making it over four thousand years old and the repository of a great deal of the histories of our major religions and our very civilization.

The Alexandria Library supposedly contains knowledge that would resolve all of the questions and controversy about the Old Testament. People will do almost anything to acquire such knowledge, believing it will give them unlimited power and wealth. Malone’s ex-wife appears in his shop to tell him his son has been kidnapped and will only be returned safely if the kidnapper receives the key to the location of the library.

Malone’s quest to rescue his son, trap the bad guys and solve numerous other fraught problems is thus the substance of this well-written, convoluted, and complicated novel. Malone and the other characters encounter an amazing host of well-thought-out and dangerous situations that will keep readers attention.