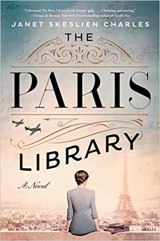 I started this book without high expectations. I’d already read one book set in Paris during the Nazi occupation, this year. It was a good book, well executed, well written, a good plot. Heart-rending, as most books on this subject are. What are the chances this one could compare?

Well, let me say right off, this one went directly onto my “Best Books Read This Year” list.

It’s 1939 in Paris. Young Odile Souchet, who is fluent in English, has gotten the job she always wanted at the American Library in Paris. She loves the people she works with, and after refusing a string of suitors her father presented as possible husband material, discovers true love at last. But then the Nazis occupy Paris and the American Library and their mixed bag of subscribers, including a good many Jews, are in dire danger. An American woman with whom Odile has become best friends takes a job at the library as well, hiding during the occupation in plain sight. But then she does the unthinkable and Odile’s anger and sense of betrayal knows no bounds.

Forty years later the reader discovers Odile has moved to a little town in Montana State, USA. There she befriends a girl who has lost her mother to cancer and is angry and bewildered when her father marries again after only a few months.

Together, Odile and Lily help each other grow and forgive and discover what makes a true family.

This is the best kind of book, one where you learn something and do it the easy way. By which I mean by becoming involved with the characters and absorbed in their stories. Especially with a story as meticulously researched, plotted, and executed as this one. You’ll find your emotions, your intellect, and your heart involved. And it doesn’t hurt a bit that you’ll learn some important history along the way.