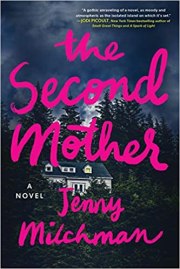 Opportunity: Teacher needed in one-room schoolhouse on remote island in Maine. Find the freedom in a fresh start.

Julie Weathers isn’t sure if she’s running away or starting over, but moving to a remote island off the coast of Maine feels right for someone with reasons to flee her old life. The sun-washed, sea-stormed speck of land seems welcoming, the lobster plentiful, and the community close and tightly knit. She finds friends in her nearest neighbor and Callum, a man who appears to be using the island for the same thing as she: escape.

But as Julie takes on the challenge of teaching the island’s children, she comes to suspect that she may have traded one place shrouded in trouble for another, and she begins to wonder if the greatest danger on Mercy Island is its lost location far out to sea, or the people who live there.

I live on an island but, I guarantee, my island is nothing like the one that Julie moves to. Physically, there’s a world of difference between Maine and Florida climates so there’s that. Also, my island has the “island time” thing going on and I’m not sure that’s as strong in a non-tropical setting plus Mercy Island is decidedly more rustic and therein lies one of Jenny Milchman‘s strengths, the evocation of the danger that can come with a seemingly simple, homespun kind of atmosphere.

Julie is running from her grief-stricken past but learns all too quickly that this fairly remote island may present her with even more darkness and secrets that could very well bring her to her knees. One interesting facet of being on this island is that the isolation, the distance from the real world back on the mainland, actually creates a sense of claustrophobia because she can’t really escape or, at least, not easily.

Another thing that Ms. Milchman does extremely well lies in her main character. Like other women who have preceded her in Milchman novels, Julie has an inner toughness that comes out when she most needs it, proving to herself and, ultimately, others that she is no pushover, no shrinking violet. On the other side, the malefactors here are surprising and add much to the sense of growing tension. While The Second Mother isn’t my favorite of this author’s books and I do think it’s a good bit longer than it should be, I still found myself reading into the wee hours because I just couldn’t sleep without knowing what was going to happen 😉

The Second Mother by Jenny Milchman,
leave a comment below. The winning name will
be drawn on Thursday evening, December 24th.
Open to the US and Canada.