Returning guest blogger Sunny Frazier, whose first novel in the Christy Bristol Astrology Mysteries, Fools Rush In, received the Best Novel Award from Public Safety Writers Association, is here today to make her case on why wearing a mask shouldn’t be a big deal.

The first presidential election I remember was the Nixon/Kennedy election in 1960. I was 9 years old. As an Irish Catholic household, we were rooting for the charismatic Kennedy boy to sit in the Oval Office. Rumors spread that the Pope would run the country and Kennedy would be a puppet president. Instead, JFK became a sad icon.

In 1969, I was a senior in high school. College students were pushing to lower the voting age to 18. If the country was going to send young men to Vietnam, shouldn’t those men have some say in the matter? In 1970, the age was lowered.

I left home and joined the Navy. In the barracks there were no TVs and newspapers weren’t delivered. Stationed at Roosevelt Roads, Puerto Rico, we were cut off from what was happening stateside. Our main source of news came from the new transfers. We would latch onto them and ask about the latest fashions and saw the new hairstyles (Farrah Facet’s flip). That’s how we found out about Nixon stepping down. “There’s a new president,” one of the newbies said. We had a new Commander in Chief and NOBODY TOLD US. Seemed to me like a major oversight.

Not that it mattered. None of us bothered to vote. Being isolated and far away from home, we didn’t really know how to go about it. Besides, we were busy with work, partying and surviving hurricanes. 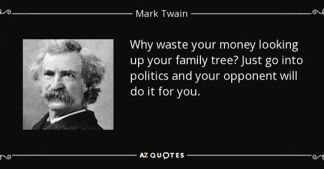 This wasn’t the case when my father was in the Navy. The squadrons were called together and the captain told the men how they were to vote: Republican. Remember, Eisenhower was popular and a WWII hero, especially to the military. The brass wanted a president who would allot them generous amounts of $$$. The Cold War was the hot ticket. 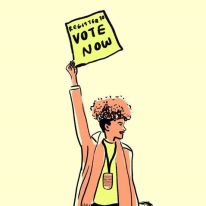 At the end of his life, my father confessed to me that he’d never voted. He also told me that growing up in North Carolina, his father had a special role at the voting booth. His job was to stop Black people from voting. My grandfather was not KKK or overtly racist. He was a gentle man with a terrible job to do. He would put a hand on the shoulder of one of the farmhands and quietly say, “Now Joe, you know I can’t let you vote. Go on home and you forget about all this.”

My mother was the one who surprised us. I don’t know when she became politicized, but I do remember her adamantly supporting Ross Perot. She was probably an Independent and leaning toward Democratic. If she’d been alive, I’m sure she would have supported Obama.

Like my dad, I had no interest in voting. Two friends heard me say that and they hustled me down to register. They had me vote for a councilman they supported. Unfortunately, he was jailed for embezzlement while in office. I learned to make better choices.

After that first experience, I was hooked. I now proudly walk into the Senior Center in my small town, push the flimsy curtain aside and do my civic duty. The elders manning the table smile and give me a sticker. We all feel very patriotic.

Unfortunately, I was unable to vote in the 2016 election. I got the long-awaited call from the Portland VA hospital that a matching kidney was available. Within hours I was on a plane flying as if my life depended on it, which it did. I would stay 6 weeks. I watched Portland erupt into protests and demonstrations. Some were violent. Maybe my single vote wouldn’t have made a difference in the outcome, but missing the opportunity to have a say in one of the most conflicted elections in history made me sad. 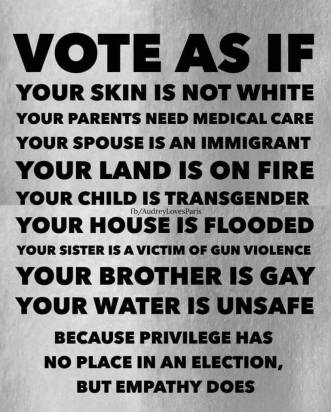