I often find posts by other bloggers
that strike a chord in me for one reason
or another and I’ll be occasionally sharing
them here on Buried Under Books. 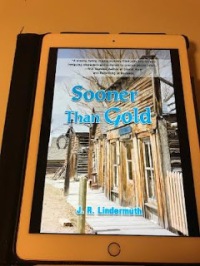 It is late June 1898 as Sooner Than Gold by J.R. Lindermuth begins. Hiram Mariner is the local doctor and he has come to fetch Sheriff Sylvester Tilghman in his newfangled horseless carriage as they both are wanted down at a mine just outside of town. Nathan Zimmerman, owner of the mine just outside of Arahpot, Pennsylvania wants both men pronto. Since Zimmerman is technically his boss, the good sheriff has to go as fast as possible and that means his own horse is out.

The ride to the mine was bad enough. Having to go down deep in the mine by way of the elevator was way worse. Both were required as the situation is such that the Doc and the Sheriff had to see for themselves.

A group of miners were working when a rockfall of some sort occurred. All of the miners survived the initial rockfall. It took about twelve hours to get to the trapped miners. When they finally broke through to a small group of trapped miners, Kessler had a knife in his hand and was standing over a man by the name of Petry. Petry was very much dead.

While the body of the scene had no obvious wounds, according to Doc, the assumption by all is that Kessler killed him. Kessler swears he didn’t kill Petry. There is no evidence one way or the other and until the Doc does his autopsy, all the Sheriff can do is investigate and put Kessler in a jail cell.

He does both and a lot more in this very enjoyable western tale. Rich in atmosphere and setting, this complex mystery has multiple storylines that tangent away from the primary and generate interesting and rich background situations. Those deals do not overshadow the complicated main storyline which steady powers along throughout the book.

The result is an interesting and very good tale that is part western, part mystery, with a dash of romance, and a lot more. Sooner than Gold by J. R. Lindermuth is a very good read and well worth your time. The book is a sequel to the very good Fallen From Grace and can be read without reading the preceding book if so desired.

I have had this book in my eBook TBR pile for years now. I have no idea now how it came to be in my possession.