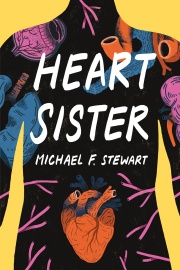 After his twin sister, Minnie, dies in an accident, Emmitt’s world goes sideways. He’s lost his best friend and it feels like the family is falling apart without her. But Minnie was an organ donor and Emmitt soon receives an anonymous thank you letter from one of the transplant recipients. Inspiration strikes, and he decides to try and put his sister back together, in spirit. He’s going to track down each organ recipient and film them to show his parents the results of Minnie’s selfless act and help them move on. But when each recipient falls short of his expectations and the star of his film, the girl who received his sister’s heart, refuses to meet him, Emmitt has to turn to extreme measures to find her. What he doesn’t know is that his “heart sister” is hiding an agonizing secret, one that could push Emmitt to the breaking point.

There’s very little one can do to ease the pain when a person you love passes away but how much harder must it be for a teen when that person is his twin. Emmitt is having a hard time dealing with this but he really worries that his mom can’t seem to recover even a bit. Perhaps finding and filming each person who received an organ from Minnie will help, maybe even make his dad speak Minnie’s name again.

Emmitt’s quest starts out well when he tracks down the man who got Minnie’s corneas and, as he continues on, I became more and more invested in what he was trying to do and the reactions of these lucky people, some not so positive as others. Can this bring Minnie back? No, of course not, but each “piece” he finds takes him closer to healing, to feeling as though it’s okay for him to still be living. That might be hard to do with a mother who wishes she’d  never had Minnie…and, by extension, him.

This story is full to the brim with seemingly endless pain and, yet, Emmitt shows us that there is always reason for hope that all is not lost when death crushes those left behind. This is a boy with strength and a dream that he might be able to help his parents through their grief while coping with his own and the people he meets are just what he needs to understand how his sister’s generosity keeps her alive. Despite the sorrow that is at the crux of the story, Emmitt finds healing for himself and a lasting memorial for Minnie, the girl who created her own notion of life from her love of taxidermy.

As for the ethics of finding organ recipients and the methods Emmitt uses to do so, that’s a question that won’t ever be completely reconciled and each reader will reach their own conclusion. Emmitt is not always the nicest guy and neither are some of the recipients but, in the end, we’re all just people with hopes and dreams.

Michael F. Stewart is an award-winning author of many books for young people in various genres, including Ray Vs. the Meaning of Life, which earned a Kirkus Star and won the Publishers Weekly’s Booklife Grand Prize. and Heart Sister (Summer/Fall 2020, Orca Books). Michael lives in Ottawa.
Author links:
http://michaelfstewart.com/
https://www.goodreads.com/author/show/2969126.Michael_F_Stewart
https://www.facebook.com/MichaelFStewart/
https://twitter.com/MichaelFStewart

10 ebook copies of
Ray Vs the Meaning of Life