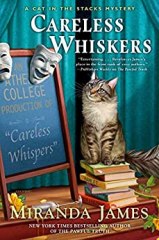 
Librarian Charlie Harris is excited when his daughter Laurie reveals that she is starring in a local production of a new play, “Careless Whispers.” Frank Salisbury, Laura’s husband, is the director, and in order to stir up more interest in the play, professional actor Luke Lombardi will be Laura’s co-star. Laura and Luke worked together in the past and, despite his Tony nomination, Luke was an overbearing egotist. When he arrives, it’s with an entourage—a French couple. The man, Anton, is Luke’s valet and the woman, Madame, is Luke’s mistress.

The rehearsals are plagued with practical jokes directed at Luke. On opening night, when Luke is onstage and pours a drink from a bottle and immediately collapses, Laura becomes a suspect. She was to drink from the same bottle, but hesitated, and police suspect she might have known about the poison. Other members of the cast, the stage crew, the French couple, and the playwright are also under suspicion. Because Charlie’s life revolves around his two adult children, his grandkids, his job at Athena College, and his Maine Coon cats, Diesel and Ramses, he gets involved in the investigation, much to the consternation of local law enforcement.

The conclusion wraps up quickly, and offers up a character new to the story near the end as a possible red herring. The origin of the murder weapon also seems far fetched and unlikely, which is a small disappointment in an otherwise entertaining mystery. This is book twelve in the series, which combines libraries, a small southern town community, and cats, and has a male protagonist—rare in a cozy series.