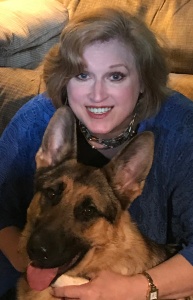 A popular speaker, Lauren is also the owner of Acorn Book Service, the umbrella under which falls iRead Book Tours. She lives with her husband and two spoiled rotten German Shepherds on a mountain in Harpers Ferry, WV.

Visit Lauren’s websites and blog at:

Okay! I’m throwing up my hands. I can’t help myself.

In January, I was minding my own business―working on Came Upon a Midnight Murder, the upcoming Mac Faraday Mystery―when she came into my mind.

I tried to ignore her, really I did. Readers have been asking for the next Mac Faraday mystery. I had already delayed it once for The Nutcracker Conspiracy. I couldn’t delay it again. But she kept whispering in my ear—begging me to write her cozy little mystery. Leaving me no choice, she promised that it would not take long.

I’m not ashamed to admit that I had an imaginary friend when I was growing up. His name was Sam. My mother said Sam and I were buddies from the time I could talk until I started school and made real friends. Don’t get scared. None of my imaginary friends have coerced me into robbing banks or committing murder. Basically, they just tell me stories. Eventually, I started writing these stories down.

That is how writers are born.

Writers know that their characters aren’t real people. But they do come to life and, like real people, they can nag you until you feel compelled to give into them.

This occurrence was captured very well in a movie that was released a couple of years ago. The Man Who Invented Christmas told the story of how Charles Dickens came to write A Christmas Carol. In this movie, Dickens was thinking and reworking the plotline for A Christmas Carol. He declared that if you come up with the right name, the character will come to life.

In the scene, which is featured in the movie trailer, Dickens rambled through various names for his main character until he said, “Scrooge.” Suddenly, there is a gust of wind. Off-screen, you hear Christopher Plummer (the actor who played Scrooge) say, “Close the window. I’m not made of money.”

Dicken’s eyes light up and he turns around.

Ebenezer Scrooge stood before him.

For authors, that is precisely how a character comes to life.

No, there is not a real-life flesh and blood person standing before the writer. But they do come to life. They have their histories, their loves, their hates, their issues. Some characters are laid back and will patiently wait their turn for the author to get to them and their story. (Chris Matheson has been quite patient for me to get to the next Geezer Squad mystery.)

Others don’t know the meaning of patience. Such is the case of Nikki Bryant. I wasn’t even looking for a new character for a new book. I was already working on one in progress. Just suddenly, one afternoon while writing a scene in Came Upon a Midnight Murder, I turned around and there she was with her boxer dog Elmo!

While her tendency to bend or even break the rules has earned her journalism awards, Nikki’s foot-on-the-gas nature does get her into trouble. Even after two decades, folks in her small town of Pine Grove still remember that wherever Nikki Bryant goes, Trouble is close behind.

Nikki’s homecoming is not without trepidation. Her world travels were not so much to chase one story after another as it was to run from the one case that she feared facing the most—her father’s unsolved murder.

Now in her mid-thirties, Nikki refuses her mother’s request to return home to take over the family business, a local television station. She is quite content working for a major news station in Las Vegas and curling up at night with her Elmo, a social media influencer.

But then, a friend of hers on social media named NerdyGuy suggests a pact: Reconnect with their first loves. If she goes home to face the man she had left behind, NerdyGuy will reconnect with his first love and tell her how he still feels.

NerdyGuy has Nikki’s number. Never one to back down from a challenge, Nikki packs up Elmo and returns home to Pine Grove—with Trouble right behind her.

Folks in Pine Grove, Pennsylvania, claim that where Nikki Bryant goes, trouble is not far behind. Her refusal to back down from a challenge has made Nikki Bryant one of the best investigative journalists in her field.

When an online friend nudges her to join him in a pact to reconnect with their first loves, Nikki and her boxer dog Elmo leave the bright lights of Las Vegas for the charming town of Pine Grove. There, she must face the biggest challenges in her career and life—the first love she had left behind and her father’s unsolved murder.

But before she has time to unpack her car, Nikki stumbles upon the dead body of local news anchor, Ashleigh Addison, her childhood rival. Could Ashleigh’s death be connected to an explosive news story that she had teased about airing live? Did that explosive story have anything to do with the murder of Nikki’s father?

With the clues in her father’s cold case hot again, Nikki aims to chase down the story of her life until she catches his killer—no matter what it takes.

To enter the drawing for a digital
ARC—your choice of epub, mobi
or pdf—just answer this question:

How are you entertaining yourself
during Social Distancing?

4 thoughts on “Forgive Me! It’s a Writer Thing—and a Cover Reveal!—and a Giveaway! @TheMysteryLadie”