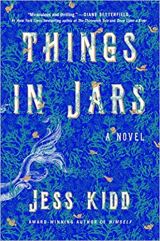 When I first laid eyes on this novel I wasn’t going to read or review it. Not my kind of crime novel, I thought. But I read the first page. Then I read the entire thing, almost without stopping. This woman has a way with words and even more significantly, with story.

Here is London of the Victorian Age, but not the London of royalty and means. This is the London of disease, of violence and brutality, of starvation and lives too often begun and played out in darkness and misery, unseen, unremarked and unconsecrated. Here is London in myth and reality. More, here is a story that takes one to the edge of the sea and dares you to look deep, below the surface and just consider the possibilities.

Bridie Devine is an unusual anomaly in London. She’s a middle-aged single woman who supports herself as a private investigator. It’s the middle of the century and while prisons like Newgate are well-known, well-established protective police departments are not. The story chases Bridie back and forth from significant childhood among Irish contemporaries to recognition of her prodigious intellect at an early stage to considered analysis of facts and evidence.

Make no mistake, though this story deals prominently with other worldly manifestations, it is rooted in the mean and fraught world of the lower classes and with real human emotion and attitude. Here is a story that will grab you and not let go, even after the final page.

One thought on “Book Review: Things in Jars by Jess Kidd @JessKiddHerself @AtriaBooks”