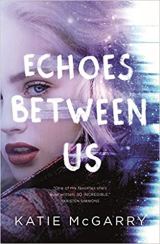 Veronica is seventeen, and has a benign brain tumor. Her mother died two years ago of a brain tumor, and Veronica worries that hers is getting worse, and that she is facing a long painful death like her mother. She lives with her truck driver father Ulysses in an old house, and they rent out the bottom floor to make ends meet. Veronica sees the ghost of her mother in the house, and converses with her while Ulysses is on his out of state trips.

The new tenants are Sawyer, a good-looking, popular athlete at her school, his young sister Lucy, and their mother. Since Sawyer’s parents’ divorce he’s been responsible for his sister and running the household. He’s on the swim team but is struggling with his grades because of dyslexia. His mother drinks too much on the weekends, and to cope, Sawyer seeks out dangerous dives off quarry cliffs and bridges.

In order to graduate Veronica needs to do a senior group project, but no one wants to partner with the class “weird” girl. She convinces Sawyer to partner with her on a project about ghosts, by applying a little blackmail and arguing that it would be convenient for both of them.

Sawyer doesn’t want to visit his father, who is now living with a woman who is expecting his child. He resents his father leaving him with the household responsibilities, and for not paying to support his family. Sawyer’s mother complains of having no money and forgets to pick up Lucy from school, and now Lucy is seeing ghosts.

The story is told from alternating chapters narrated by Veronica and Sawyer. The characters are both smart responsible teens dealing with serious real-world problems. They are facing challenges, both personal and with family and school. It should have wide young adult appeal, especially for fans of John Green.