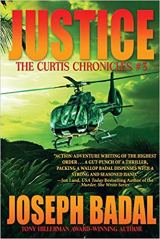 
A lot of action, a lot of characters, a tight story and several clichés. For anyone looking for an action-packed beach-read here’s one that should fill the bill. The story is tight, cleanly presented and nicely resolved. It spans the Western Hemisphere from the United States to Nicaragua and back.

Mathew Curtis and his wife, Renee, travel the globe. He’s a medical man, a former doctor, who travels the world lecturing about his company’s orthotics products. His wife often travels with him, in part because they have been targeted in the past by a smart but deranged human trafficker.

Lonnie Jackson is a wealthy, evil schemer with a world network of drug dealers and smooth-talking recruiters of young women, ostensibly for low-level but honest jobs in western cities. The reality, of course, is quite different. Jackson blames Matt and Renee for his family’s deaths and has waited years for revenge.

Jackson is living and thriving in Nicaragua. Matt Curtis comes to Costa Rica next door for a medical conference. Jackson plans a vicious kidnapping and murder. Meanwhile in Washington and Bulgaria, plans and events crawl toward a vortex of insane violence. The question is always, will Renee and Matt survive and be reunited?

The pace of the novel is relentless, the writing is strong and spare. For some readers, the patterns will be a problem. The bad guys have rotten teeth and terrible breath, the CIA and most of the U.S. government is corrupt to some degree, the good-looking and smartest, most adept, people are the small group of Matt’s friends, former military men, who come together to help in the direst of circumstances, using all their skills and expertise.

There are a couple of interesting twists toward the end of the story which are truly unexpected. They provide an intriguing basis for later novels, grab reader’s attention and remain just out of reach for fans of this novelist.

Reviewed by Carl Brookins, January 2020.
http://www.carlbrookins.com http://agora2.blogspot.com
The Case of the Purloined Painting, The Case of the Great Train Robbery, Reunion, Red Sky.

To enter the drawing for a print copy
of Justice by Joseph Badal, leave
a comment below. The winning name
will be drawn on Monday evening,
January 20th. Open to residents
of the US and Canada.