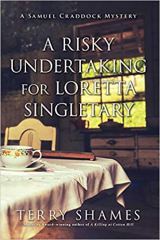 
This is the eighth book in the series with Chief Samuel Craddock.  Chief Craddock lives in the small town of Jarrett Creek, a rural community where, for the most part, the residents all know each other.  Recently, Samuel has noticed that his friend and neighbour, Loretta Singletary, has changed her hairstyle, has been wearing new clothes, and he’s more than a bit surprised to learn she’s signed onto an online Dating site.

The next day Samuel still hasn’t seen his friend and he’s beginning to worry.  He talks to several of her friends but no one has seen Loretta.  That’s when he decides to call her son. But he hasn’t seen her either. And when someone mentions they’d read of women being duped out of money, or worse,  by men they met on a dating site, Samuel decides it’s time to open an investigation.

When a woman’s body is found on a road leading to a nearby town, a woman who had also recently joined the same Dating site, Samuel is alarmed and the search for Loretta begins in earnest.  But unaccustomed with the internet Samuel quickly grows frustrated with his efforts, but he pushes on, worried that Loretta might suffer a similar fate.

Spending time with Chief Craddock is always a treat.  Check him out.