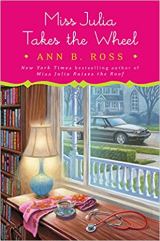 
This is the 21st in this popular series but it is the first I’ve read.  So, a bit of background for those who also haven’t read others in the series.  The series is set in North Carolina and the main character is Miss Julia, a wealthy white southern woman.  In this book, Miss Julia is very concerned because her doctor and his wife are taking an extended European vacation, leaving the doctor’s practice to a substitute.  Although neither Miss Julia nor her husband, Sam, are ill, she worries that they could become ill and have to see a doctor they do not know.

Having been asked to reach out to the substitute doctor (Dr. Don Crawford) and his wife (Lauren), Miss Julia invites them to dinner and introduces them to other couples who are friends of hers.  While Miss Julia finds the doctor to be charming, the dinner is strained due, in part, to Lauren’s shyness and unwillingness to talk  other than to answer direct questions.  Later her friends raise some concerns about Don.  Nevertheless, Miss Julia and her friend Hazel Marie try, with limited success, to engage Lauren in local activities including play dates with Hazel Marie’s and Lauren’s children.  Meanwhile, Miss Julia is also helping her friend’s teenage son with learning to drive.

There is much going on in this book including a mystery, the outcome of which was not hard to deduce, Miss Julia’s willingness to help her friends in need, and her often self-sacrificing behavior.  While I realize that this series is considered funny and entertaining, this book deals with a serious problem which is neither funny nor entertaining.

Finally, I  want to address the  conversations between Miss Julia and her African- American maid, Lillian.  While Miss Julia turns to Lillian for advice and takes Lillian into her confidence, Lillian’s side of their conversations is written in a particular manner that clearly puts her in a lower social class than Miss Julia.  To illustrate with just a few examples of which there are many:  Lillian’s dialogue includes “ast” instead of “asked”; “liberry” instead of “library”; and “growed up” instead of “grown up.”  This comment is not directed toward any region’s way of speaking but rather to the obvious racial overtones in such conversations.  Because I did not find the book funny, nor the mystery a challenge, and I was put off by the thinly veiled racism in the narrative, I do not recommend this book.