After an attack on earth, all reflective surfaces become weapons to release monsters, causing a planet-wide ban on mirrors. Despite the danger, the demand rises, and 17-year-old Marty Callahan becomes a distributor in an illegal mirror trade―until he’s caught by the mayor’s son, whose slate is far from clean. Both of them are exiled for their crimes to one of the many abandoned cities overrun by fog. But they soon realize their thoughts influence their surroundings and their deepest fears begin to manifest.

There is much to like about this book but two things in particular really made me love it—(1) the main characters are boys and (2) there’s no romance. No, girls do not have to be the stars of everything 😉

Marty is a flawed character in any number of ways, not least of which is his propensity to do what’s best for himself even if it’s not legal or good for anyone else; in fact, he has been known to actually put others in harm’s way. Despite that, he works hard to control his OCD and his ultimate goal is to find his brother. Before the alien attack, Marty was making progress under therapy to manage his OCD but it’s much more difficult now without professional help and, of course, medication is no longer available.

Earth is in shambles after the aliens brought monsters and survival is predicated on a strict ban on reflective surfaces because that’s how the monsters get through. That ban, quite naturally, created a black market for mirrors and Marty is a player. When he gets caught by another teen, Elliott, both are headed for real trouble, sent into the deadly fog. The two boys are on their own and have to rely on each other, developing a real friendship as they come to know and trust each other.

The plot here is creative and well-planned, keeping me flipping electronic pages to find out what would happen next. The author’s characterizations are vivid and appealing and the monsters are just as scary as they should be…almost as much as Elliott’s mother. Also, not to repeat myself, it’s really refreshing to have a story focused on two boys. 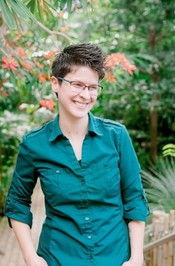 Hey! I’m Naomi Hughes, writer of quirky young adult fiction (usually involving physics and/or unicorns). I live in the Midwest US, a region I love even though it tries to murder me with tornadoes every spring. When not writing, my hobbies include reading (of course), traveling, and geeking out over Marvel superheroes and certain time-traveling Doctors. My debut YA sci-fi standalone novel, Afterimage, is available now from Page Street Publishing. My next novel, Refraction (also a standalone YA sci-fi), comes out in Nov 2019. I also offer freelance critique services at naomiedits.com.

PRIZE: Win (1) copy of REFRACTION
by Naomi Hughes (US Only)