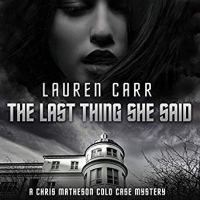 “I’m working on the greatest mystery ever,” was the last thing noted mystery novelist Mercedes Livingston said to seven-year-old Chris Matheson before walking out of Hill House Hotel never to be seen again.

For decades, the writer’s fate remained a puzzling mystery until an autographed novel and a letter put a grown-up Chris Matheson on the trail of a cunning killer. With the help of a team of fellow retired law enforcement officers, each a specialist in their own field of investigation, Chris puts a flame to this cold case to uncover what had really happened that night Mercedes Livingston walked out of Hill House Hotel. Watch out! The clues are getting hot!

It all starts out simply enough when an acclaimed mystery author and her husband are abducted but years later, the case, which had never been solved even though the husband’s remains had been found, comes to light again in a surprising way. Retired FBI agent Chris Matheson is closely involved through his mother’s long friendship with a woman named Shannon and he and the rest of the Geezer Squad are compelled to take up this very cold case. This, after all, is what the Geezers do best and they bring many talents to the task at hand.

Before long, more crimes, seemingly unrelated, begin to surface. Some of these are also from the past while some are new, most likely caused by digging into the old case and what appeared to be simple and straightforward suddenly isn’t. One thread after another develops and Chris and his bookclub cohorts decide to bring in a little extra help, that of Mac Faraday, Archie Monday and David O’Callaghan from Spencer, MD, and Joshua Thornton and Cameron Gates from Chester, WV. All are central characters in two other series by Ms. Carr and they play integral roles here. Accompanying all these detecting folks are a bunch of rambunctious animals—including German Shepherds Sterling and Gnarly, a bunny named Thor clothed in pink frills, a cat named Irving who’s disguised as a skunk, an anklebiter named Chompers and more four-legged critters—and they bring a lighthearted side to the tale. In fact, one of my very favorite storylines involves elected mayor Gnarly, a lot of toilet paper, a few wildlife criminals and Gnarly’s feud with a political enemy. I totally loved that and it will remind you of current events 😉

So, with a plethora of characters, possible motives and side crimes that may or may not be connected, the hunt is on for answers and the ride couldn’t be much more complex, just the way a good mystery should go, in my opinion. Adding to the fun is outstanding narration by Mike Alger who has wormed his way into my top five voiceover artists and helped propel The Last Thing She Said into one of my favorite books read in 2019 and this series into the top of Lauren Carr’s bibliography.

“Too many twists and turns to easily share about this
book. Nevertheless, Carr has pulled off another “hit”
that kept me reading in one setting until the clues were
so well together that the villain fell into our laps…or
Chris’s, LOL Carr has put a lot into the book beyond the
mysteries this time…Characters enjoyed chocotinis,
visited book stores…and even blundered into getting engaged
(the ring had been purchased 4 months ago)… But,
for me, a special thank you for the political spoof at a time
when politics at the national level is devastating,
gave me a laugh and lightened the load of it all!”
— Review by Glenda Bixler, Book Reader’s Heaven 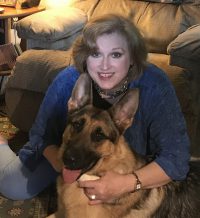 Lauren is a popular speaker who has made appearances at schools, youth groups, and on author panels at conventions. She lives with her husband, and two spoiled rotten German shepherds on a mountain in Harpers Ferry, WV. 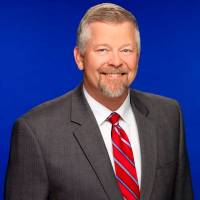 Channel 2 Meteorologist Mike Alger joined KTVN-TV in May, 1989. Prior to that Mike had worked at KNDU-TV in Washington. Mike has provided northern Nevada “Weather Coverage You Can Count On” during the 1990 President’s Day Blizzard, the drought in the mid- 1990s, the New Year’s Flood of 1997 and the historic Snowstorms of 2005.

Mike has been married for more than 30 years and has two grown children. His hobbies include golf, music, biking, tennis, scuba diving, writing. He has written and published one novel and is working on a second. He is also a narrator of several audio books, and his work can be found on Audible.com.