Review: Shamed: A Novel of Suspense by Linda Castillo 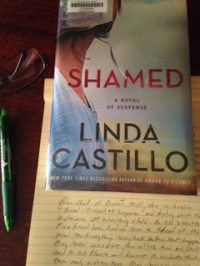 Kate Burkholder, Chief of Police of Painters Mill, Ohio, is back in Shamed: A Novel of Suspense and dealing with a murder and subsequent nightmare of a missing child. The old Schattenbaum place hasn’t been lived in since the flood of 1969 damn near took everything. Before the flood, as a child, Mary Yolder was out there all the time. She still comes back to wander the abandoned property in order to cut flowers and harvest the walnuts that fall from nearly a dozen trees. These days Mary Yolder is a widow, sixty years old, and grandmother and she keeps the collecting of walnuts tradition going with her grandkids. On this day she is out there with her five year old granddaughter, Annie, and her seven year old sister, Elise.

Long before the day is done, Mary Yolder is dead by the work of an angry and vicious killer and Elise has been taken by that same person. Annie is left behind, badly traumatized, and of little help to Chief Burkholder or to her sister.

A kidnapping is always difficult to deal with, but especially in the Amish community where privacy is highly valued. The family is a respected pillar of the community, but it seems pretty clear as the initial hours pass, that they are keeping secrets. Secrets that may or may not have a role in the horrific crimes that have rocked everyone in the area.

Shamed is the latest in the long running mystery series that began many years ago with Sworn to Silence. The latest read is another solidly good read. It is also one that could be read by readers new to the series as the references to earlier cases are kept to a minimum. For those of us old hands at this great series, author Linda Castillo weaves another tale of mystery and intrigue and does so with all the usual series regulars and a few new folks one is glad to meet. Shamed is another good book in a great series and well worth your time.

For another take on the book, make sure you read Lesa Holstine’s review from July.

Shamed: A Novel of Suspense

Material supplied by the good folks of the Dallas Public Library System. My library copy came from the Forest Green Branch.

One thought on “Review: Shamed: A Novel of Suspense by Linda Castillo”