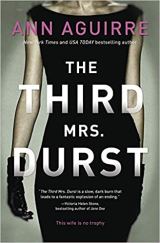 Marlena Altizer left home as soon as she could—she had a mother addicted to meth and younger brothers and sisters who had different fathers. The children often went hungry and Marlena was raped by one of her mother’s boyfriends when she was eleven. She scraped together enough money to buy a bus ticket to Nashville when she was sixteen and lived on the streets, where she met another teen runaway, Jenny Song. She caught the attention of a talent agent, who got her a modeling job. Her career took off, and she travelled to Europe for modeling jobs and attended classes at a Germany university.

Marlena was determined to find a rich and powerful man, and leave poverty behind. However, the man she found, Michael Durst, was rich and powerful but also cruel, controlling and sadistic. He concocted a false history for her, and arranged for her to be adopted by a Croatian couple. All her movements were watched by henchmen of her husband.  Marlena realized she was in over her head and she couldn’t see a way to escape.

While I enjoy a good tale of revenge, Marlena is not a very likable or sympathetic character. She uses her husband, who gets what’s coming to him, but she also manipulates her bodyguard in a cold and calculating way, who was one of the only people on her husband’s staff who was kind to her.   While she is loyal to her sisters and her friend Jenny, they also become entangled in the dangerous world of Michael Durst. A violent and gritty tale of deception and control.