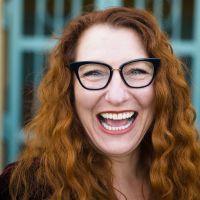 Jennifer Kincheloe is a research scientist and writer of historical mysteries. Her novels take place in 1900s Los Angeles among the police matrons of the LAPD and combine, mystery, history, humor, and romance. THE WOMAN IN THE CAMPHOR TRUNK was released in November, 2017 and was nominated for a prestigious Lefty Award. Her debut novel, THE SECRET LIFE OF ANNA BLANC was a finalist in the Lefty Awards for Best Historical Mystery, The Colorado Author’s League Award for Best Genre Fiction, the Macavity Sue Feder Award for Historical Mystery, and is the WINNER of the Mystery & Mayhem Award for Historical Mystery and the Colorado Gold for Best Mystery. Jennifer grew up in Southern California, but has traveled to such places as Greenland, Nicaragua, Ethiopia, and Papua New Guinea. She’s been a block layer, a nurse’s aid, a fragrance model, and on the research faculty at UCLA, where she spent 11 years conducting studies to inform health policy. Jennifer currently lives in Denver, Colorado with her husband and two teenagers, two dogs, and a cat. There she conducts research on the jails. 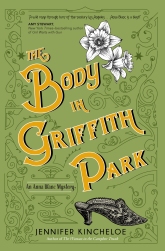 In THE BODY IN GRIFFITH PARK, police matron Anna Blanc pursues a suspect in style, borrowing the family’s luxury railcar without permission. It comes with a fireplace, a double bed, and a gigantic bathtub—everything you’d want in a railcar, really. Lots of velvet and silk.  A bear skin rug. Catering and an open bar. It’s the perfect way to travel alone or with a delicious young detective, providing he isn’t annoying you by actively opposing your investigation.

In the 1900s, trains for cross-country travel were the only game in town. Of course, rich people wouldn’t ride with the rabble. There were first class cars, and for the most fortunate, private railcars.  Private railcars were the private jets of Anna’s day. 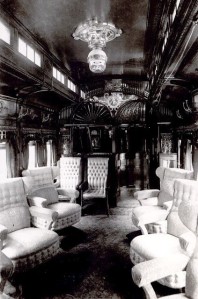 Private railcars are still a thing for America’s rich. Once, when riding the California Zephyr to San Francisco, Dan Aykroyd attached his private railcar to our train. Regrettably, I didn’t get to peek inside. But here’s a photograph of John Paul DeJoria’s 1927 railcar. (He made The Forbes 400.) I think Anna Blanc would have been quite comfortable.